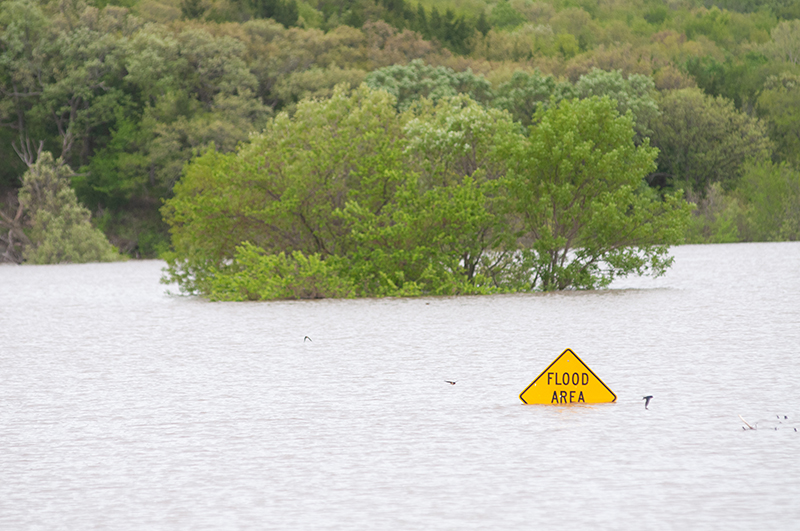 Above normal precipitation has fallen over much of Kansas this spring and weather patterns are unlikely to change during early summer, according to Kansas State University weather specialists at Kansas Mesonet.  | Download this photo.

Waterlogged Kansas may be in for even more rain, flooding

MANHATTAN, Kan. — Rainfall patterns that turned lawns and farm fields into unintended ponds and swelled rivers to capacity and beyond are likely to continue into June, according to weather specialists at Kansas State University.

“The persistent pattern has consisted of back and forth movement of a stationary front across the central Plains. This front is separating cold with below-normal temperatures to the north and west and above-normal temperatures to the south and east,” said Chip Redmond, manager of Kansas Mesonet, a system of weather stations across the state that detect and record weather data. “Where the front sets up daily will be the focus for the heaviest flooding rains.”

Because of already saturated soils, Redmond and his colleague, assistant climatologist Mary Knapp, do not expect flooding issues to end in Kansas anytime soon.

“It is almost a guarantee that water control issues will continue into June, if not worsen,” Redmond said. Areas in the central and eastern part of the state have been hit particularly hard.

Springtime temperatures have also been below normal, said Knapp, who added that it’s a trend likely to continue. That will also be a factor in how quickly the soil can dry out.

Beyond June, Knapp and Redmond expect temperatures to warm seasonably but noted that soil surface moisture may increase evaporation/transpiration rates, injecting moisture into the atmosphere. That in turn may result in above average shower and thunderstorm activity.

With ponds and lakes already near or at capacity in some areas, even without more moisture, it is likely to take months before flows return to normal, Knapp said.

“Every rainfall we get in the process will push back that return, possibly substantially,” she said.

More information is available on the Kansas Mesonet website, Office of the State Climatologist website, and in the latest K-State Agronomy eUpdate weekly newsletter.

“It is almost a guarantee that water control issues will continue into June, if not worsen.”