Flooding in Kansas causes concerns over impact on trees

MANHATTAN, Kan. – Heavy rains in much of Kansas have caused localized flooding in some areas this spring, and one of the results has been concern over the impact on trees.

“There are three major concerns when it comes to trees and too much rain,” said Ryan Armbrust, forest health and conservation forester with Kansas Forest Service. “First is the immediate destabilization of the tree caused by saturated soils or soil erosion. Second is the deposition of significant amounts of silt on the root system. Third is the duration of flooding.”

Trees that suddenly begin to lean or even fall over due to the force of high water, wind or soil erosion should be treated as a hazard if they are near people or structures, Armbrust warns. An assessment by a certified arborist is likely justified, especially for large trees.

High water may also deposit a significant amount of silt on the root system of a tree.

“If more than an inch of silt is deposited, then some careful removal of that silt will benefit the tree,” said Armbrust. Burying the root system beneath a heavy layer of silt will reduce the root system’s ability to exchange gases and negatively affect the tree.

The duration of flooding or of saturated soils will have a direct impact on a tree’s ability to recover. This is largely dependent on tree species. Most trees will recover from being inundated for less than a week, especially if the water is flowing instead of stagnant.

Trees most sensitive to short-term flooding include redbud, walnuts, mulberry, upland oaks, most pines and conifers such as spruce and Eastern redcedar.

Honeylocust, elm, birch, and lowland oaks are more tolerant, surviving even a few weeks of flooding and saturated soils.

“The most tolerant trees include typical riparian forest species such as maples, pecan, hackberry, persimmon, ash, sycamore and cottonwood,” Armbrust said. “Baldcypress and willow are perhaps the most tolerant of all.”

Regardless of species, though, some care must be taken to help trees maintain vigor and reduce stress after flooding.

“Almost all species will have some dieback of the root system due to lack of soil oxygen, reducing the tree’s ability to take up water later in the season, so supplemental irrigation in the hot, dry days of summer will help your trees continue to flourish after the flood,” Armbrust said.

For additional information on tree health and selecting an arborist, visit kansasforests.org.

Heavy rains in much of Kansas have caused localized flooding in some areas this spring, and one of the results has been concern over the impact on trees. Landowners should look for immediate destabilization of trees; deposition of significant amounts of silt; and consider the duration of flooding.

“There are three major concerns when it comes to trees and too much rain. First is the immediate destabilization of the tree caused by saturated soils or soil erosion. Second is the deposition of significant amounts of silt on the root system. Third is the duration of flooding.” 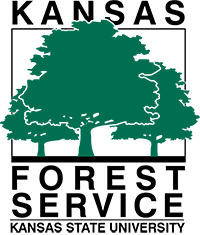 The Kansas Forest Service is the nation’s fifth oldest state forestry agency. The agency serves rural landowners, communities, rural fire districts, forest and arboriculture industries, and citizens of the state through its Conservation Tree and Shrub Planting, Fire Management, Community Forestry, Rural Forestry, Marketing and Utilization, and Forest Health programs. The Kansas Forest Service state office is located in Manhattan, Kansas, just west of the campus of Kansas State University. The Kansas Forest Service is housed as an independent agency within K-State Research and Extension. The agency receives its direction from a mission statement that reads: “Care of Natural Resources and Service to People through Forestry.”

K‑State Research and Extension is a short name for the Kansas State University Agricultural Experiment Station and Cooperative Extension Service, a program designed to generate and distribute useful knowledge for the well‑being of Kansans. Supported by county, state, federal and private funds, the program has county extension offices, experiment fields, area extension offices and regional research centers statewide. Its headquarters is on the K‑State campus in Manhattan. For more information, visit www.ksre.ksu.edu