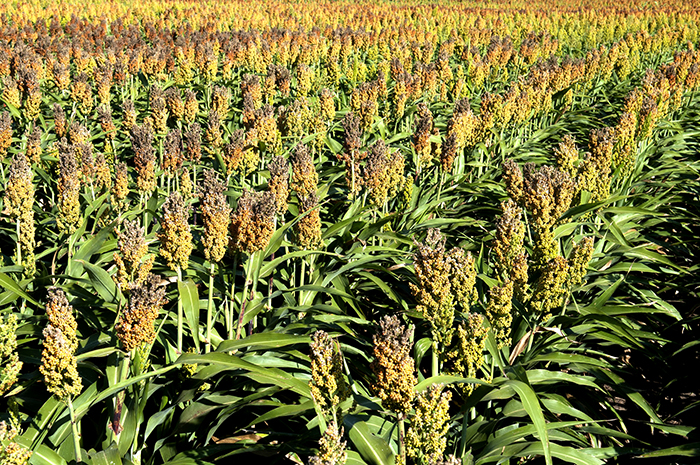 A novel collaborative effort will help scientists develop ever-improving plant hybrids for sorghum and other dryland crops while increasing agricultural sustainability, achieving technology breakthroughs, and creating a scientific network capable of sustaining research far into the future, which will shape policy around production necessities and funding.  | Download this photo.

MANHATTAN, Kan. — Many sorghum growers believe their crop can be a key to the future partly because of its drought-tolerant nature. Now they’re banding together in an unprecedented way to invest in that belief.

The worsening reality of water scarcity means research and increased production of dryland crops such as sorghum, millet and other “ancient grains” is a race against time.

Groundwater depletion and changing rain and snow patterns will make it difficult, if not impossible, to grow some crops the way they are grown today, especially in places such as semi-arid western Kansas.

Historically, dryland crops such as sorghum have occupied the middle range of crop-acreage size: viable enough to be part of a commercial pipeline, but not big enough to command the resources of cutting-edge research at universities and major private-sector support. With genome-to-phenome (G2P) breeding that’s now changing.

First used to increase the drought tolerance of corn, G2P gives sorghum growers a new foundation on which to build the future of their crops.

G2P breeding was developed by scientists at the University of Queensland in Australia and Corteva Agriscience (formerly DuPont Pioneer). This method of combining proprietary genomic and phenotyping methodologies became the cornerstone of Corteva’s highly successful Optimum® AQUAmax® drought-tolerant corn hybrids.

"We can design thousands of potential hybrids, simulate their performance over thousands of growing scenarios, and test the best designs under tough real-world conditions,” said Geoff Morris, Kansas State crop geneticist and G2P project director. “With G2P breeding, we can better connect the genome, the genetics in your seed bag, to the phenome, the crop performance across your farm.”

The challenge was to find a way to use this approach to improve sorghum and other dryland crops.

That’s where sorghum growers got creative.

Through the Foundation for Food and Agriculture Research’s Seeding Solutions Grant Program, K-State researchers received a $1 million grant from the foundation to expand the G2P approach to sorghum. FFAR’s model requires matching funds be contributed from private industry, thus amplifying the scope and potential impact of the research.

“This project has the potential to increase yields of crops that grow using less water, and when planted alongside leading crops, can better distribute the existing water in the soil and supporting thriving farms,” said Sally Rockey, FFAR’s executive director. “Using this new approach, Kansas State can boost yields and conserve limited water resources. This work could be a breakthrough for sustainability and profitability.”

“This research is crucial for sorghum farmers since the main long-term goal for this project will be to increase yields, impacting sorghum growers across the state and the country,” said Ignacio Ciampitti, cropping systems specialist and associate professor at Kansas State University. “The project focuses on the recent success on developing drought-tolerant corn hybrids and translating some of this technology to sorghum, increasing not only productivity at the farm scale but also yield stability among farmers.”

Sarah Sexton-Bowser, who leads the Collaborative Sorghum Investment Program through the Center for Sorghum Improvement based at Kansas State University, said, “the trick was finding how to collaborate with the best of public and private science to deliver a leap-frog in approaches to advance sorghum. Sorghum has to undergo a radical change to remain a viable crop.”

And because Ciampitti and other K-State crop production scientists work across disciplines – sorghum breeding and corn breeding, in this case – have a long-standing relationship with the KGSC, and work with industry collaborators, Corteva saw the promise of this idea and donated roughly $250,000 in the form of in-kind support, including the expertise of its scientists, precision phenotyping capabilities, and the crop models that had already proven successful through the development of Optimum® AQUAmax® corn hybrids.

“This is a true harmony of shared visions, accountability, mission and timing,” Sexton-Bowser said.

The resulting public-private collaboration is called the G2P Bridge.

Sorghum as a bridge for crop scientists

“Kansas farmers are the cornerstone of the G2P Bridge,” said Jesse McCurry, executive director of the Kansas Grain Sorghum Commission. He said the commission sees G2P Bridge as “a chance to leverage farmer research investments with the best of public science and direct linkage to the market. For every dollar the commission invested, there are three additional dollars, all working toward advancing productivity in sorghum cropping systems.”

The end goal of this research is to add to diversity of crops in water-limited areas.

Specifically, the four-year study, which began in January, examines cold tolerance, length of growing seasons including when a plant experiences distress from drought and heat, and which combinations of plant genetics best respond to these stresses.

Forming the collaboration with Corteva Agriscience was critical for the success of this project,” Ciampitti said. “Not only are they providing in-kind funds, they are also providing the strategic resources necessary to ensure that the project is successful and makes a meaningful impact.”

Corteva Agriscience research scientist Laura Mayor said the project seeks to accelerate development of other crops by building on success stories. “Sorghum is being used as the model crop for this project in terms of its adaptability to water-stressed environments and as a bridge between major crops, such as corn, and minor, unutilized crops such as pearl millet,” she said.

The project uses the proven G2P approach to characterize, test and advance two genotype-by-management systems that may increase productivity in water-scarce environments.

One system involves early planting of chilling-tolerant hybrids, shifting the season to an early and more favorable environmental water demand.

The other system involves dense planting of stay-green hybrids, shifting the growing season to even later in the year and improving synchrony with plant-water demand and use.

The G2P Bridge project will build a nationwide knowledge base by engaging in workforce development with early-career plant breeders and scientists to support understanding and adoption of G2P breeding in underutilized water-efficient crops via teleconference seminars, annual workshops, collaboration networks and mentoring.

Kansas State University’s Dean of the College of Agriculture Ernie Minton said this project is critically important to the land and people of Kansas. “Productive and resilient agricultural systems are a focal point of K-State’s research,” he said. “The G2P Bridge is an example of how K-State scientists are doing real work applying 21st century science to the challenges facing farmers and rural communities.”

By building this capacity while also developing ever-improving plant hybrids, the G2P Bridge will increase agricultural sustainability, while also achieving technology breakthroughs, and create a scientific network capable of sustaining research far into the future that shapes policy around production necessities and funding.

“Establishing this collaboration project is a great opportunity for us to interact with public researchers in a topic that is fundamental for farming, such as water use and efficiency,” Mayor said. “Using a holistic approach through different areas of research to understand water efficiency in sorghum will have a positive impact on overall productivity of water-limited cropping systems.”

All this because a number of Kansas sorghum producers found a common vision that informs their larger vision of feeding an increasingly hungry – and at the same time thirstier – world.

What’s at stake for Kansas?

The state is the perennial leader in U.S. sorghum production by far, with about one-third used for livestock feed and one-third exported to other countries. Last year, Kansas produced an estimated 233 million bushels of the 365 million bushels produced in the U.S.

Texas came in second at 62 million and Colorado third at just over 17 million bushels, according to the U.S. Department of Agriculture’s National Agricultural Statistic Service.

Kansas sorghum farmers, K-State researchers and industry leaders are working together to develop next-generation breeding for dryland crops such as sorghum and millet. This unique team-up, which builds upon groundbreaking genetic improvements from other crops, offers a faster way to test new varieties that will grow well in places where water is becoming scarce.

“This project has the potential to increase yields of crops that grow using less water, and when planted alongside leading crops, can better distribute the existing water in the soil and supporting thriving farms. Using this new approach, Kansas State can boost yields and conserve limited water resources. This work could be a breakthrough for sustainability and profitability.”

TM ,®, SM Trademarks and service marks of Dow AgroSciences, DuPont or Pioneer, and their affiliated companies or their respective owners.