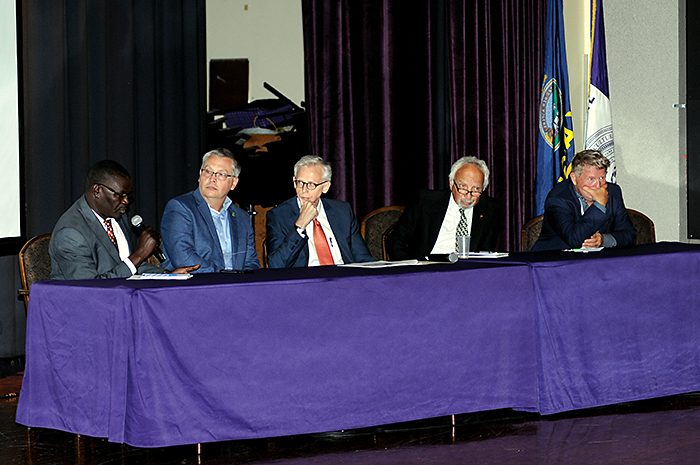 MANHATTAN, Kan. – A series of presentations from experts in animal health and welfare demonstrated the complexity of the topic during the third plenary session at an international livestock conference on Monday.

The Global Agenda for Sustainable Livestock brought nearly 300 leaders in industry, government, civil society and academia together at Kansas State University to discuss the present and future of topics including animal husbandry.

Ulf Magnusson, professor of animal reproduction in the Department of Clinical Studies at the Swedish University of Agriculture Studies, introduced the topic of the session on animal health and welfare. He summarized a wide-ranging white paper that covers the challenges and innovations in five areas: impact of animal disease; zoonoses and pandemics; foodborne diseases; antimicrobial resistance; and animal welfare.

To illustrate that point, several other experts took turns elaborating on the various aspects of the topic.

Donald Hoenig, senior veterinary advisor at American Humane, cited a comment from the white paper: “In several countries regulations about these aspects are not in place or there are not resources to enforce them.” Hoenig said, “This rings true” because brucellosis – which has been all but eliminated from domestic animal population in the United States since 1982, remains common in low-income countries.

Likewise, every tanker truckload of milk has been monitored for antibiotic residues for the last 25 years in the U.S., but that is not the case in low-income countries.

With regard to animal diseases, Hoenig told of his journey to the United Kingdom in 2001, when that nation was forced to cull thousands of cattle due to an outbreak of Foot and Mouth Disease. “It was the worst month of my career,” he said, “but it was also the best month of my career because it caused me to come back here and start to get involved in taking action on how we would do things differently.”

Taking action in a different way was the central focus of a presentation by Jim Mulhern, president and chief executive officer of the National Milk Producers Federation, as he described the 10-year history and impact of Farmers Assuring Responsible Management (FARM).

“We are raising the bar and industry has responded,” Mulhern said. FARM is first animal welfare program to be certified by the International Organization for Standardization. It accounts for 98 percent of the U.S. milk supply in 49 states – up from 40 percent in 2014.

Next up was Armando Hoet, director of the Veterinary Public Health program at The Ohio State University, who provided a detailed case study in training local authorities to screen for antimicrobial resistance in livestock and eventually build out that capability to a nationwide system.

Hoet explained how a two-week, intensive course in Columbus, Ohio, for representatives from 14 Caribbean and Central American countries led to a program that created “roadmaps” and “cookbooks” that could be adapted for each country’s specific circumstances and scaled up to ensure better animal and human health.

Lastly, Martin Barasa, regional head of programs for Veterinarians Without Borders – Germany, who is based in Nairobi, provided additional perspective about maintaining animal health in different sets of circumstances.

He said disease prevention is not limited to food animals. In many African cities, he said, stray dogs can spread rabies, so he and others have been working on providing vaccinations for strays in cities and informal urban settings.

He also offered a pair of pointed observations: One was the fact that the conference is centered on innovation, specifically in production efficiencies in food systems. “Is Africa being left behind?” he asked, noting that animal health data is often unreliable even if it is accessible at all in many African countries.

His other question was how to package simple messages for semi-literate producers in low- and middle-income countries so they can learn modern livestock practices and ensure health for themselves and their animals.

The Global Agenda for Sustainable Livestock is being held on the Kansas State University campus Sept. 9-12. The group’s goal is to create dialogue and action in response to the world’s growing demand for meat, eggs and milk, while protecting natural resources.

This is the first time that this meeting has been held in the United States, and the first time it is hosted on a university campus. For more information, visit http://www.livestockdialogue.org.

Read the conference paper on Animal Health and Welfare.

Livestock experts from all over the world discussed a wide-ranging set of topics related to animal health and welfare during the first day of dialogues at the Global Agenda for Sustainable Livestock conference on Monday at K-State.

Photo gallery from Day 1 of the conference