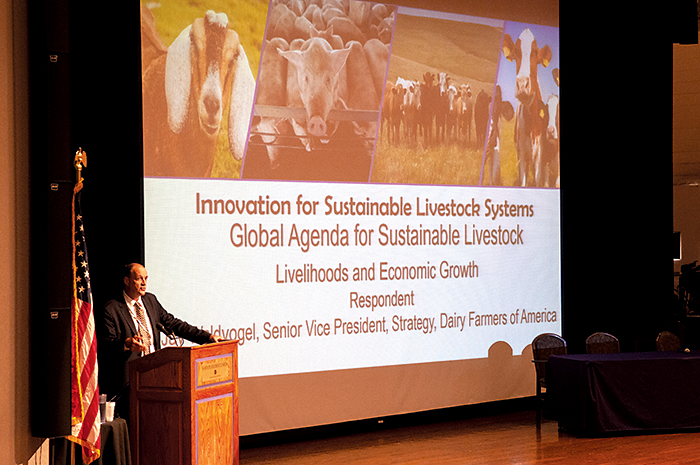 Jay Waldvogel, of Dairy Farmers of America, speaks the Global Agenda for Sustainable Livestock at the 9th Multi-Stakeholder Partnership meeting on Monday, Sept. 9, in Manhattan, Kansas. | Download this photo

MANHATTAN, Kan. – Innovation is the key which will unlock greater sustainability, economic growth, and nutritional security for the world’s livestock producers, as they face the challenges of a growing global population and ongoing challenges such as anti-microbial resistance.

That’s the core message being discussed at Kansas State University this week. Delegates from 22 nations are here for the 9th annual Global Agenda for Sustainable Livestock (GASL) Multi-Stakeholder Partnership meeting. During the second half of Monday morning’s sessions, one of the authors of the position paper,  “Innovation for sustainable livestock: Livelihoods and economic growth,” gave an overview of her research, and then listened to responses and examples offered by other delegates.

For most of us, if we only look back two generations in our families, we can find livestock production, said Shirley Tarawali of the International Livestock Research Institute, headquartered in Nairobi, Kenya.

Tarawali recounted two trips to Nigeria, when she and her colleagues saw firsthand the economic impact of livestock production for the nation’s women.

“We were not allowed to meet with them privately [on the first visit]; two years later, those women were raising animals, growing feed for animals, and they could meet with any visitors that we would bring along,” she said. The women were also keen to show off things like pasta makers and sewing machines — goods they had purchased through their own enterprise.

This dovetails with statistics shared by Donald Moore, executive director of the Global Dairy Platform. “We tend to think of dairy farms as large-scale operations, but the global average is 2.9 cows per farm — much smaller than we think,” Moore said. “Most of these dairies are part of a diversified operation: crops are grown to feed the cows, who produce milk for the family, and consumers.”

By quantity, milk is globally and in most regions the most important livestock product, according to the Food and Agriculture Organization of the United Nations.

“There are 1 billion people in the world touched by dairy, including farm workers, veterinarians, truck drivers, implement dealers, processors and more,” said Jay Waldvogel, representing Dairy Farmers of America and the key respondent to Tarawali’s paper.

“There are some 6 billion consumers every year who enjoy the food we produce,” Waldvogel continued, “but we are far from perfect.”

Dairy producers the world over are struggling to stay afloat, and sustainability is a key factor. Waldvogel’s own family dairy eventually fell into demise, and he cautions today’s producers to seek out innovation. “When you look at future of ag, and dairy farming, you have to be realistic to what fits the needs,” he said.” What is sustainable [today] is not necessarily what your grandfather did. We have to consider the history, or how history will unfold.”

One example of innovation leading to sustainability and economic growth can be found among the small-stakeholder producers of India. 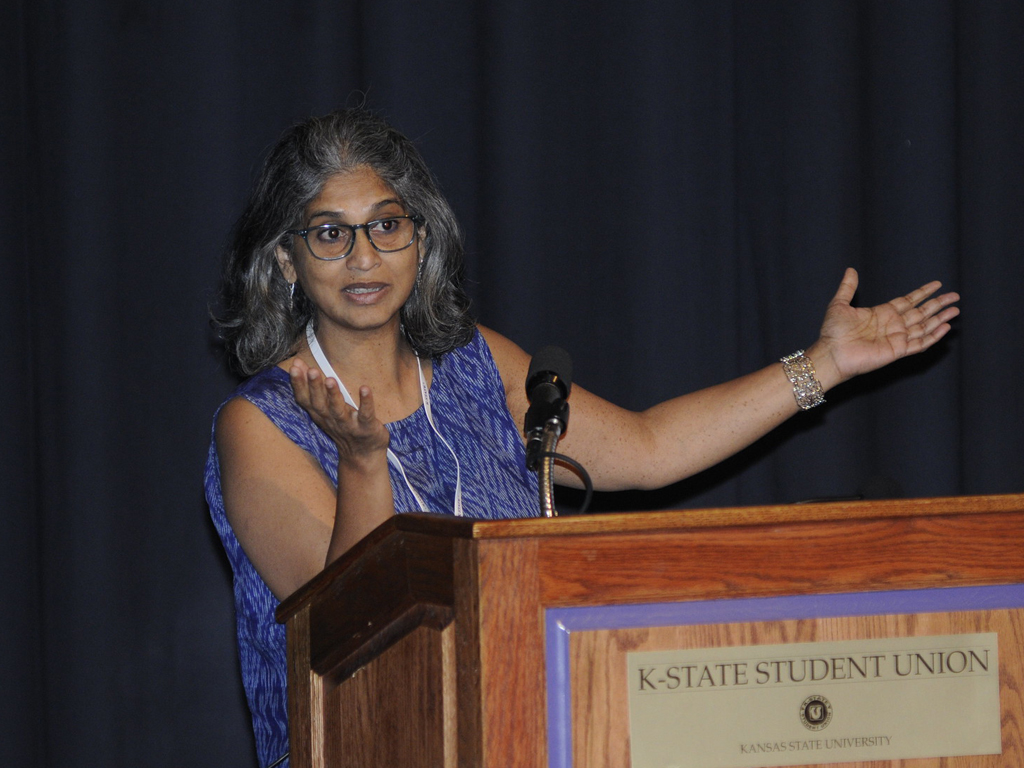 India is at the forefront in the fight against antimicrobial resistance. Nitya Sambamurti Ghotge, co-founder and director of ANTHRA, a non-governmental organization that works with small farmers, peasants, pastoralists and other small-scale livestock producers in India. ANTHRA’s board of directors is exclusively female, and Ghotge is one of the veterinarians who started the group in 1992.

“Antimicrobial Resistance is a global problem,” Ghotge said, “contributing to loss to individual and global incomes.”

Because traditional approaches to the problem proved too costly for poor farmers, Ghotge and ANTHRA had to innovate a new strategy to address the resistance problem: they used mobile technology to communicate with producers directly, and leveraged free, readily available indigenous plants, herbs and roots in place of costly medicines.

“Several medicinal plants in India such as turmeric, holy basil and neem are well known to have antimicrobial properties,” Ghotge said.

“Mastitis is a big problem in dairy cattle, especially cross bred cattle in India,” Ghotge continued. “We trained dairy farmers in simple but effective hygienic milking practices. We also advised them to feed their animals certain herbs such as Tinospora cordefolia and Asparagus racemosus root which are traditionally known to have antimicrobial properties.”

The result: Farmers report a lower incidence of mastitis in their herds. Meanwhile, trials of the ANTHRA protocol have also been conducted in the Netherlands, with dairy farmers reporting good results.

Ghotge sees this local strategy as a potential blueprint for the future of agriculture on a global scale.

“Farming for too long has reputation as being back-breaking labor, with farmers perceived as socially backward, illiterate. I think if farming is to progress,” Ghotge said, “the image of farmers has to change. Farming needs to be progressive, looking into the future, with people who are feeding the world while helping other sectors, such as veterinary medicine and the environment. These are the images we need for the farming community.”

Photo gallery from Day 1 of the conference