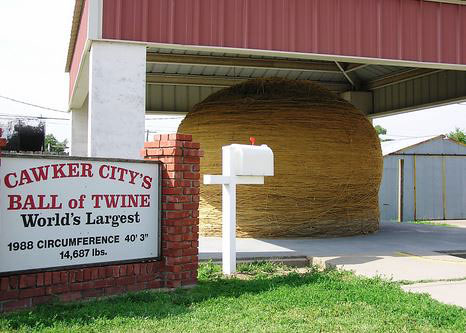 “The belle of the ball.” That phrase may call to mind a pretty girl dancing in a fancy ballroom, but in this case, it refers to a different kind of ball. This belle is the woman who serves as the volunteer caretaker of the world’s largest ball of twine. She’s helping people from around the world enjoy this unique rural attraction.

Linda Clover explained that Frank Stoeber was farming near Cawker City in Mitchell County in 1953. As he fed small bales of hay to his cows, he began to accumulate the loose balestrings made of sisal twine.

At right: The world's largest ball of twine in Cawker City, Kan.| Download this photo

“He was a child of the Depression, so he didn’t throw anything away,” Linda said.  Rather than burning or discarding the twine, he started winding it into a ball. By the time he was done cleaning up his barn, he had a ball as big as his barn door.

Over time, he continued to add to the ball. Friends and neighbors started donating their twine to the project and the ball became massive. In 1956, when the Salina Journal wrote an article about it, the ball measured seven feet five inches and weighed 4,035 pounds.

People wanted to stop and see this remarkable and offbeat sight. The Cawker City commercial club approached Frank about donating it to the city, so he did. In 1961, it was brought into town to display. In 1962, a shelter was built to protect and display the quirky attraction. Frank Stoeber continued to add twine until his death in 1974, and the community continued to do so after his passing.

In 1973, the Guinness Book of World Records awarded Frank Stoeber’s ball of twine the title of World’s Largest. But controversy erupted. In 1978, a man in Minnesota contended that his ball of twine was even bigger.

The good citizens of Cawker City responded to this challenge. In 1982, the town held its first annual Twine-A-Thon in conjunction with the annual city picnic. Along with a parade, poker run, golf tournament and horseshoe tournament, people wrap more twine around the ball during that weekend each year. Other guests add twine year-round.

By 1988, the ball was so big that it was moved to the city park in Cawker City and the present shelter was constructed. At that time the ball of twine measured 40 feet three inches in circumference, thus surpassing its rival in Minnesota. So there! Currently, the ball weighs 26,690 pounds, includes more than 8 million feet of sisal twine, and is still growing.

Linda Clover, the Cawker City school librarian, became the volunteer caretaker of the ball of twine in the late 1990s. She fields calls from all over the world. She even carries pre-cut pieces of twine with her, so that guests can add a piece and take their picture next to this remarkable landmark. Only authentic sisal twine is to be added to the ball.

“I love people,” Linda said. “This brings people from all over, which is good for our community and north central Kansas,” she said. Since Cawker City is located on Highway 24, Linda is actively involved with the Highway 24 Alliance. She enjoys this interaction so much that the Wall Street Journal once referred to her as “the belle of the ball.”

Cawker City’s ball of twine has been featured in everything from Rachael Ray to National Lampoon’s Vacation. It has drawn visitors from around the globe, as far away as Antarctica and Mongolia. “There was a young couple from England who were going to tour the U.S. for their vacation, and each one chose one attraction which they did not want to miss,” Linda said. “One chose Yankee Stadium, and the other chose Cawker City’s ball of twine.”

For more information, go to www.cawkercitykansas.com/ball-of-twine.

The belle of the ball. In this case, it refers to the woman who promotes the world’s largest ball of twine. We salute Linda Clover and all those who are making a difference by promoting this unique attraction. I hope their visitors have a ball.

In 1953, a farmer named Frank Stoeber started winding his used baling twine into a ball. With help from friends, neighbors, the community and visitors, it grew to become the world’s largest ball of twine. Local volunteer Linda Clover now cares for the ball of twine and entertains visitors from around the world.