Kansas State University is committed to providing equal access opportunity and reasonable accommodation to campus programs and services for faculty, staff and students. If you require accommodation to view or hear a video live stream or archive, please submit a request for accommodation. Students should make their request to the Student Access Center. All others should request accommodation through Human Capital Services.

NOTE: A full-length version of this story originally appeared in Kansas State University’s SEEK Magazine. See this and other features at https://www.k-state.edu/seek.

MANHATTAN, Kan. – The small, rolling vehicle looks a bit like something out of a science fiction film as it moves slowly across a barren patch of land on Kansas State University’s North Agronomy Farm. 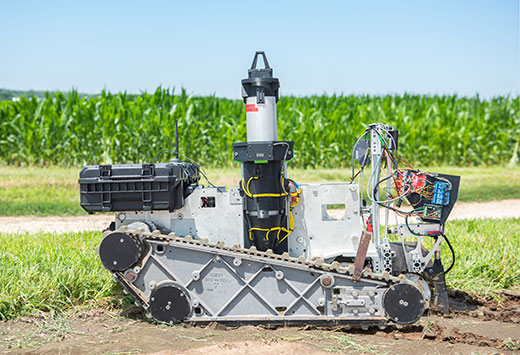 It rolls on treads similar to an Army tank, but the complicated array of attachments suggests something else.

The machine, which measures 2 feet tall and 3 feet wide, was built for farm work by K-State agricultural engineer Dan Flippo and his students, who are testing its ability to cut a narrow trench and plant seeds in unison.

Robots, such as that shown at right, could help farmers with some of their work, while providing volumes of information to help plant, manage and harvest better crops. | Download this photo.

Their work on this day is a glimpse at agriculture of the not-too-distant future, when small machines guided by computer programs will do some of the work and give farmers large volumes of information that they can use to plant, manage and harvest better crops.

“We are not trying to take over tractors or get rid of tractors; we are trying to make more food,” Flippo said. “By 2050, we are going to have close to 10 billion people, and right now we are not close to meeting the amount of food production that will be needed.”

Much of agriculture already is being touched by some form of technology, whether it be sensors on tractors that precisely measure planting and fertilizing rates, or thermal infrared cameras attached to drones that fly above farm fields and detect water or insect stress in crops. There are even robotic arms that can milk a cow.

“I think farmers are ready for everything that is easy to adopt and which gives them a reliable and confident source of information,” said Ajay Sharda, associate professor of biological and agricultural engineering. “That’s their bottom line. They cannot spend hours and hours to set it up or hours to run them.”

Therein lies an opportunity for universities like Kansas State, which, in recent years, has built considerable momentum toward incorporating technology on America’s farms.

Rovers in the Field

Flippo’s fleet includes several vehicles that spent their first life as motorized wheelchairs. The students – which include undergraduates and graduates – are using the motor and casing to custom-build machines that serve a specific purpose on the farm.

“There are different categories that we are building,” Flippo says. “The first is the rover category. This would be like a microwave size robot. Their purpose is to go out and scout a field, which is important because humans can scout really well, but nobody wants to walk around a field all day.”

When an entomologist goes out to look for pests in a field, they may look at two or three spots and make a judgment about the whole field. Rovers can cover the entire field, perhaps working through the night, and provide data on pest pressure in the entire field.

“There are some issues there, such as if it breaks, you’re going to have to go find that in the field,” Flippo said, noting that engineers also need to account for how long that vehicle can hold a charge, how it handles ruts in the field, and whether it can follow the correct path between rows.

“But,” he adds, “these small rovers can go through the field consistently and keep track of the field much better than humans ever could.”

K-State also is building machines that are slightly bigger than the rovers, called ag drones. Flippo said these robots are “the workhorses,” such as the unit they were testing recently to plant seed. Ag drones potentially could be used to carry tanks of chemical to an area of a field or plant seed in areas where a larger tractor can’t safely go, such as sloped hills.

Larger robots, some the size of lawnmowers and others the size of a bed frame, are capable of more conventional farming work, such as pulling disc drills for wheat, scouting fields and planting fields. But as the robots get bigger, Flippo notes that companies and farmers become more concerned about safety. At this point, K-State is not working on larger robots.

In January, 2019, Flippo, Sharda and K-State entomologist Brian McCornack were awarded a grant for $882,920 from the U.S. Department of Agriculture through its National Robotics Initiative to study the use of robots to detect and defeat insects in crop fields.

According to the USDA, farmers spray nearly $15 billion worth of chemicals annually yet still lose 37% of their crop yield to pest damage.

Sharda says K-State’s group is working on a rover that has a sensor on the front of the vehicle to detect insects, such as aphids in a sorghum field. The sensor will have the ability to detect whether the concentration of aphids – which measure no more than one-eighth of an inch – exceeds a critical limit.

When the concentration of insects exceeds the critical limit, the robot will send a signal to a sprayer that is mounted to the back of the vehicle. The sprayer takes that cue and knows immediately that it should treat the area.

“We are going to synchronize the system so that based on the moment that the vehicle sees the insects, it will start spraying backward, and it builds a buffer zone around the area,” Sharda said. “In other words, it will spray beyond the point where the insect was sensed so that we have established a full zone of control.”

Sharda notes that spraying from below the crop canopy will help to contain more of the chemical where it’s needed, and reduce spray drift. Ultimately, that means less chemicals being used and less money paid by the farmer.

Eye in the Sky

Sharda also is leading a project to use unmanned aerial vehicles, best known as drones, to scout crop fields for water stress. The four-year project is helping farmers schedule irrigation more efficiently because they better understand areas of a field that are more stressed than others.

The researchers have mounted thermal infrared cameras to the drones, which they fly at several hundred feet above the field. The cameras measure canopy temperature throughout the field, sending volumes of information to a computer on the ground that meshes the data into a model that gives the farmer guidance on irrigating that field.

Eventually, Sharda said this system could be combined with information from the ground robots to give farmers an even clearer picture of their crop’s water needs.

“In regards to UAVs, I think farmers are getting more confident in terms of what they are seeing,” Sharda said. “There is a lot of research being done by universities and lots of companies that are spending a lot of resources on many acres across the United States to make those models more robust. The artificial intelligence capabilities are definitely improving.”

Who will do the work?

Farmers may be hesitant to adopt some of the newer technology because, frankly, farming can be very personal. Farmers enjoy driving the tractor, checking on their crops and livestock and even doing some of the hard work.

But statistics on farm labor indicate that the industry may need help. A 2013 report by the National Agricultural and Rural Development Policy Center – an agency funded by the U.S. Department of Agriculture – indicates that agriculture is vulnerable to “labor supply shocks, which could increase costs and threaten the ability of some farmers to harvest labor-intensive crops.”

The reality for U.S. agriculture is that it may be faced with a shrinking work force willing to do physically-demanding and less-compensated farm jobs.

“You know, agriculture has been around forever,” Flippo said. “We are really good at getting seed in the ground fast, but maybe this is the time to re-think it: What does it really take to get those seeds in the ground?

“Just think if we could have a bunch of small robots going out to do that work. They can cover the entire field and get the work done. And they can work all night.”

K-State engineers are testing the use of small ground vehicles that can do some farm work and give farmers large volumes of information to plant, manage and harvest better crops.

“We are not trying to take over tractors or get rid of tractors; we are trying to make more food.”