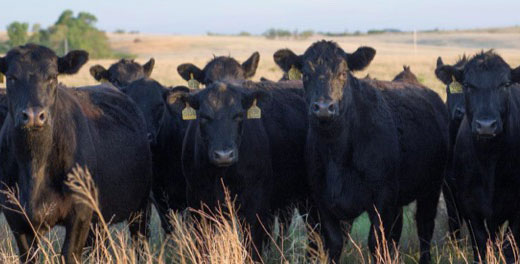 The decision to keep replacement heifers often is based on the priorities of the operation. | Download this photo.

Decision often is based on priorities of the operation

MANHATTAN, Kan. – Late fall is the time many cattle producers are weaning spring born calves and making selections for replacement females. Trying to decide if replacement heifers should be kept and, if so, the best way for making that decision was a recent discussion topic for Kansas State University Beef Cattle Institute professors Bob Larson and Bob Weaber.

Larson, a veterinarian, said the decision to keep heifers depends on the priorities of the operation.

“It is hard to select heifers that will excel in maternal traits such as fertility, low maintenance costs, and longevity, while also selecting for growth and carcass traits,” Larson said. “It is hard to find a single animal that is going to excel at both.”

However, for producers raising their own replacement heifers, the next decision is when in the production cycle to make those selection decisions. Larson said one option is to retain a higher percentage of females than ultimately needed.

In this system, the heifers are fed conservatively, putting pressure on them to reach puberty at a lighter weight. Then those heifers are exposed to bulls in a short breeding season and the ones that conceive early are retained.

“The negative to that system is that now producers have additional feed costs tied into the extra ones kept but not ultimately retained,” Larson said. An advantage of these cull heifers is that they are backgrounded feeder cattle and contribute to a revenue stream. Feed costs should be budgeted with this endpoint in mind.

Another option is to keep fewer replacement heifers at weaning and feed them more aggressively so that a higher percentage of them reach puberty early in the breeding season.

For beef producers following the second protocol, there are some criteria that Larson and Weaber believe need to be considered.

“First, the heifers that you keep need to be some of the oldest, meaning that they were born early in the breeding season, out of the cows that you like the best,” Larson said.

Weaber, a cow-calf specialist with K-State Research and Extension, agreed and added: “Those that calve early have more opportunities to become pregnant as yearlings, and as two- and three-year-olds.”

He also shared that it is important for producers to have a way to identify those females born early in the calving season. Weaber recommended a color tagging or numbering system.

Along with knowing when they were born, Weaber said, producers need to identify calves born from the more productive cows in the herd.

“As a producer, I should recognize that under my management, these are the cows that have thrived,” Weaber said. “Maybe it is that they are more moderate in size or lactation, but there is something about them that fits my management system.”

Aside from the focus on the females, Weaber added that the bulls used in herd have a much greater genetic influence. “If we are thinking about the genetic flow in the herd, sire selection is the place where we can have the biggest impact overtime. Strategic sire selection for replacements is key.”

Cattle producers often make decisions on whether to make selections for replacement females in the fall.