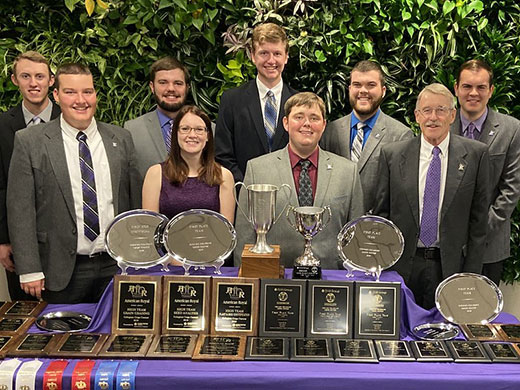 The dynasty continues with 17 national championships in 21 years

The University of Wisconsin-Platteville was second at both events. Iowa State University was third in Kansas City and Purdue University took third in Chicago.

In both contests, the K-State team took first place in all three phases of the contest: plant and seed identification, seed analysis and grain grading. In addition, team members swept the one-two-three individual overall placings at both events. Such a sweep of all three contest components and the top three individual placings at both contests is very rare, and has only been accomplished three times before in the 86-year history of the events, all by K-State.

The team was coached by Kevin Donnelly, K-State professor of agronomy. Luke Ryan, junior in agronomy from Solomon, Kansas, was the assistant coach.

In the contests, participants are required to identify 200 different plant or seed samples of crops and weeds; grade eight different samples of grain according to Federal Grain Inspection Service standards; and analyze 10 seed samples to determine what contaminants they contain.

More information is available about agronomy education at K-State.

They’ve done it again! K-State’s 2019 Crops Team has won the national championship 17 times in the past 21 years.