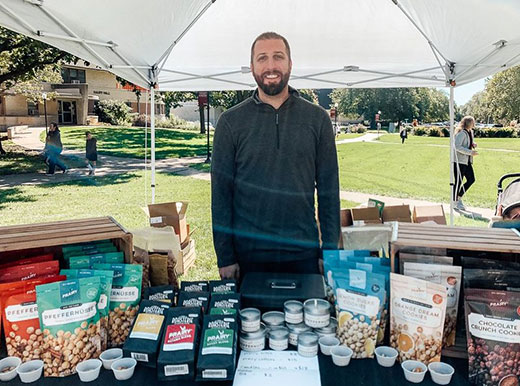 Aaron Gaedert, owner of Prairy, a specialty food and drink store in Newton.| Download this photo

Here we are at a winery in Massachusetts. Between the samples of wine, we are offered some wine-tasting crackers which help cleanse the palate between wine tastings.  Where did they come from? They came from halfway across the country in rural Kansas.  It’s one of the healthy products offered by this innovative store in the heartland of the nation.

Aaron came to Newton to attend Bethel College, as had his parents and his older brother Joel. When Joel founded Flint Hills Design, Aaron worked for him during college and after graduation. In 2014, he had the opportunity to pursue a business of his own.

Newton had a local food cooperative that closed in 2000. After it closed, a couple of women bought some of the supplies and equipment and opened a bulk health food store of their own. It was called Prairie Harvest. They later relocated into a historic 1892 building in downtown Newton.

In 2014, Aaron Gaeddert and family had the opportunity to purchase the business. He has expanded it over time.

The business has recently been rebranded as Prairy. That’s Prairy spelled with a Y as in the title of the book PrairyErth by the author William Least-Heat Moon. That book is about Chase County in the heart of the Flint Hills of Kansas.

Prairy is now the overall name for this multifaceted business. “We began as a full line natural foods store but we have branched out and expanded,” Aaron said. The business now includes a deli restaurant, catering, wholesale products, and online sales.

“When we started, natural foods was a niche,” he noted. “Now it has become more mainstream. We’re evolving toward specialty foods and drinks, with an emphasis on locally grown products.”

The Prairy store now offers local and organic produce, locally supplied meat from area farmers and ranchers, and bulk foods and spices. These include bulk grains, beans, coffee, tea, and more. Customers of the bulk products can buy containers and then pick up as much or as little of the products as needed.

Their historic building downtown has a mezzanine which has been converted into a beautiful event space. The next natural progression was to do catering there. Prairy catering can cover everything from formal five-course meals to party platters and appetizers.

Another product line is offered for online shopping. Those products include Prairy Bites, Prairy Provisions, and Prairy Life.  Prairy Bites are bite-size cookies and crackers, inspired by the German Mennonite tradition of pfeffernusse. “Our grandmother made German spice cookies,” Aaron said. The previous owners had purchased a peppernut cookie business from a woman in the nearby rural community of Goessel, population 539 people. Now, that’s rural.

They used these classic family recipes and expanded the business. “My sister-in-law’s grandmother had a Swedish cookie recipe,” Aaron said. They added other cookie flavors such as chocolate crunch, orange dream and lemon sugar, in addition to the afore-mentioned wine tasting crackers. There are wheat-free and anise-free options as well.

For more information, go to www.prairy.com.

It’s time to leave this winery in Massachusetts where we found wine-tasting crackers which came from Kansas. We salute Aaron Gaeddert for making a difference with entrepreneurial expansion based on healthy foods. It certainly leaves a good taste in my mouth.

And there’s more. We’ve met Aaron and Joel, but there was one more brother. He followed the entrepreneurial trail also. We’ll learn about his business next week.

A historic 1892 building in downtown Newton is home to an innovative food business called Prairy. Under the leadership of Aaron Gaeddert, this store now offers local, organic, and bulk foods and spices plus a deli, juice bar, catering, events center, and online sales of specialty cookies, crackers, and more.