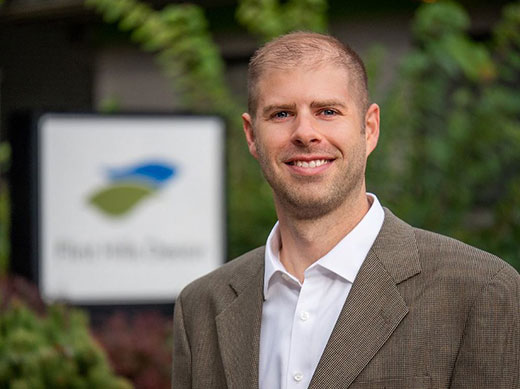 Let’s go to Boston, where an exhibit is being installed at the Museum of Russian Icons.  Where do you suppose that this exhibit was created? Would you believe, halfway across the continent in rural Kansas? Today we’ll meet an innovative Kansas company which is designing exhibits that are going across the nation.

Joel Gaeddert is founder and CEO of Flint Hills Design, the company which is installing this exhibit. Joel grew up in Kansas and went to Bethel College in North Newton, as had his parents. As a tech-savvy college student, Joel worked on a couple of websites while attending college.

His roommate’s father was the curator of the nearby Kauffman Museum and was needing help to finish a museum exhibit. Joel pitched in to help and found that he enjoyed the work. Soon people from other museums were asking for his help on their exhibits as well. Joel continued to work on websites also.

After graduation, Joel founded his own business based in North Newton. He called it Flint Hills Design.

“We like the understated beauty of the Flint Hills,” Joel said. “All of us like living in small Kansas towns.”

His business designed websites and also started building exhibits and displays for museums and other enterprises. For several years, he worked collaboratively with the Kauffman Museum staff also.

“We want to tell the stories of people and places, while celebrating their natural and cultural history,” Joel said. The company’s core principles are clarity, simplicity, authenticity, and craftmanship. Their website states: “We deliver clarity in concept, applying art and analysis to bring a shared vision to life. We strive to clearly and effectively communicate our clients’ visions with grace and precision. We use heirloom-quality materials and time-honored techniques to create meaningful spaces that stand the test of time and trends.”

Their projects include a museum on the history of Pizza Hut, the Willa Cather museum in Nebraska, and the Pikes Peak Hill Climb Experience in Colorado.

In the course of working on various exhibits, the Flint Hills Design staff developed modular walls, cases, storycarts, reader rails, connectors, and other structures that were ideal for exhibit use. Joel recognized that these would have applicability for other businesses and organizations as well. That led to the creation of a new division of the business called Upland Exhibit Systems in 2015. This business markets this specialized type of furniture and display equipment.

Examples of recent projects include traveling exhibits about the Chisholm Trail, the History of Walls, Atomic Alert and more. Flint Hills Design products or exhibits have gone to 20 states from coast to coast.

Meanwhile, the other branch of the business remains Flint Hills Web Design which still does websites. The business’s clients are located as far away as Colorado and Indiana, plus many in Kansas. Those clients can be found in such rural communities as Seneca, population 1,991, Harper, population 1,473, and Cottonwood Falls, population 903 people. Now, that’s rural.

It’s time to leave Boston, where we found an exhibit from Kansas that is being displayed at this museum. We commend Joel Gaeddert and all the staff at Flint Hills Design for making a difference with creativity and entrepreneurship. I’m glad they’re having success by design.

And there’s more. Joel was not the only member of the Gaeddert family to go to Bethel College and to start his own business. We’ll learn about another Gaeddert brother and his business next week.

Joel Gaeddert helped out his college roommate’s father, who was working on an exhibit for the Kauffman Museum in North Newton.  Joel found that he enjoyed the work so much that he created his own exhibit and website creation company, which now ships exhibits from coast to coast.