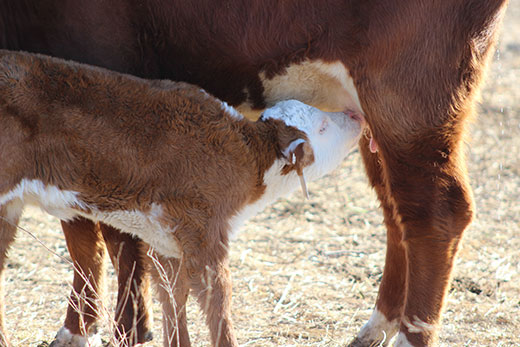 Calves need to nurse their mothers soon after they are born to maximize the immunity passed along in that first milk. | Download this photo.

MANHATTAN, Kan. – Once the calves are born into a beef cattle herd, there is no better sight than watching them get up and begin to nurse their mamas.

However, experts in Kansas State University’s Beef Cattle Institute (BCI) say that difficult deliveries, inexperienced dams and calves born without vigor sometimes keep that connection from happening. It is at those times when a beef producer may have to intervene.

Trying to determine when to offer assistance to the cow/calf pair was a discussion topic among BCI experts during a recent podcast, available online. The chief concern is getting the colostrum into the calf within the first few hours after it is born.

“Colostrum is the first milk that the calf gets from its mother that contains a lot of immunity to set it up for the first four to five months of life,” said Brad White, veterinarian and BCI director. “As soon as the calf starts drinking, it has 12-24 hours to absorb the colostrum before his gut closes.”

As to when to intervene, the experts had a difference of opinion. “If I don’t observe a first calf heifer allowing her calf to nurse in the first two to four hours, I will get involved by helping,” said Bob Weaber, beef cattle extension specialist and BCI expert.

He added: “My goal is to get at least one quart of colostrum into the calf. After milking out the cow, I offer it to the calf through a bottle and if that doesn’t work, I use an esophageal tube feeder to deliver it.”

White prefers to follow a less aggressive approach by observing calf behavior over the course of 24-48 hours. “I am not going to intervene until the calf tells me it is not thriving, by walking with its head down or trying to nurse off of other cows,” he said.

Both experts agree that the quantity and quality of the colostrum produced by the cow has a direct correlation to the dam’s body condition score.

“A cow in good body condition will have the nutrition she needs to make the proteins to pass on the immunity to her calf,” White said.

He also stressed the importance of calving in a dry, clean environment.

“The immunity is only as effective as the challenges we put it under, so if the calf is born in a mud lot, the cow’s udder may be covered in mud and that will give the calf a high pathogen challenge when it tries to nurse,” White said.

If supplementation is ultimately necessary, White and Weaber agreed that getting the milk delivered to the calf at the correct temperature is critical.

The goal is feeding it at a temperature of 100 degrees, Weaber said. White adds: “It is best to warm up the milk in a hot water bath. If you microwave it, you will destroy a lot of those proteins.”

“A cow in good body condition will have the nutrition she needs to make the proteins to pass on the immunity to her calf,”