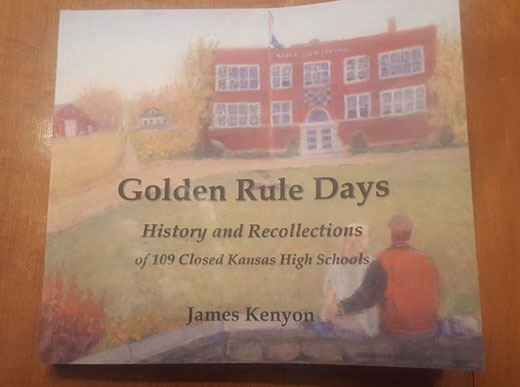 “School days, school days, dear old golden rule days.” That nostalgic song describes good memories which many people have from their school times of yesteryear. One author has captured the history of many schools from the past across the state of Kansas. It’s today’s Kansas Profile.

James Kenyon is the author of a recently published book which describes the history of 109 closed Kansas schools, including one in each county. James is himself a product of rural schools. He grew up on a farm in Graham County and graduated from Bogue Rural High School in 1966, one of a class of six people. James went on to Kansas State and became a veterinarian, eventually practicing in the state of Iowa. He was named state veterinarian of the year and served as president of the Iowa Veterinary Medical Association before retiring.

James came back to Kansas for a 50-year reunion of his graduating class at Bogue. As he traveled through western Kansas, he thought about the various other schools where he had played ball. He looked into it and found that, of the 32 communities where he had played ball, all but one had lost its high school. That led him on a quest to capture the history of these rural schools. His goal was to cover the entire state.

James and family made 12 trips back to Kansas during 15 months. He visited lots of libraries, historical societies, city halls, community centers, and even local cafes for information.

In 2019, he published his book Golden Rule Days – History and Recollections of 109 Closed Kansas High Schools. The book includes schools in every one of the 105 counties in Kansas.  In five counties, there were no high schools that closed, so he chose to tell the story of the last one-room schoolhouse or a rural grade school in those counties. There were four counties where he chose to include a second high school story, making a total of 109 in the book.

Each school is described with its name, town, mascot, school colors, location, year closed, and then many stories about the history of the school, buildings, athletics, unique factors, notable graduates, traditions, and more. These are fascinating anecdotes. The names of the communities span the alphabet from Alton to Zenda.

The introduction of James’s book describes the change in school organization through the years. In the beginning, one-room schools sprang up across the state, typically teaching all eight grades in a single building. In 1874, Kansas mandated compulsory school attendance for children ages 8 to 14. In 1958, Kansas had 2,794 public school districts. The early 1960s were the era of school district consolidation. By 1969, there were only 311 unified school districts.

Not every high school closing was due to consolidation. Three towns were destroyed in the 1951 flood. Three more were displaced by the reservoirs that were built in response. For example, Randolph Rural High School is Riley County’s entry in the book.

“Education was valued in every settlement,” James wrote. At the beginning of the book, James thanks his Bogue high school teachers – and principal, cooks and custodian – by name, with a description of how each of them contributed to his education. “Kansas in the 1900s was a special time in history for small towns, their high schools, and a great education of life skills,” James wrote. His original rural hometown of Bogue now has a population of 136 people.

James Kenyon has published two additional books, The Art of Listening to the Heart and A Cow for College and Other Stories of 1950s Farm Life.

“School days, school days, dear old golden rule days.” We salute James Kenyon for making a difference by capturing these memories of the golden rule days of yesteryear’s Kansas high schools. He ended the book’s introduction by quoting an excerpt of another poem, author unknown: “If you live and you work and develop your school, In spite of the fact it is small, You may find that your school – your own little school – Is the very best school after all.”

James Kenyon grew up in Graham County, Kansas and graduated from Bogue Rural High School. After a distinguished career as a veterinarian in Iowa, he’s written a book about the history of many Kansas high schools which have closed.