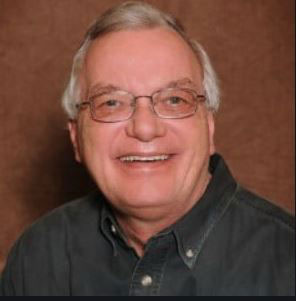 “The captain of the ship wants to see you.” That statement could sound a little ominous – like being called to the principal’s office. In this case, the summons was an indication of the remarkable listener connections which one particular farm broadcaster established through the years. This encounter demonstrated how this farm broadcaster was so important to his audience through his decades of service.

Kelly grew up on a farm in Iowa, listening to the radio in the milking parlor. When he was 10 years old, Kelly got a transistor radio for Christmas. “I would climb under the covers, turn on the AM band, and tune in to different stations from all over. It opened a whole new world to me,” he said.

Kelly decided to pursue radio as a career, did his broadcast training in Minnesota, and got a job as news director at a station in Illinois. “The news department was me and a cat,” he said. Kelly filled in when the farm director was gone and found he liked the work.

Kelly became full-time farm director and was working his way up through the ranks of farm broadcasting when WIBW called and wanted him to apply for the job in Topeka.  He turned them down – twice. “The third time they didn’t call – they sent a plane ticket,” Kelly said.

Kelly made the trip, met the staff and toured the studio. With a few hours before his return flight, WIBW had him take a quick drive into the surrounding countryside. Kelly and a local rancher drove into the rural area around Alma, population 832 people. Now, that’s rural.

“For the first time, I saw the Flint Hills,” Kelly said. “The Flint Hills, and especially the people of the Flint Hills, really sold me on Kansas.”  He took the job and soon became farm director. For 20 years, he also hosted the Midday in Kansas television show. He retired in 2019 after more than 41 years at WIBW, often hosting the early morning broadcast.

“I look back on a lot of memories, some joyous, some painful,” Kelly said. The farm crisis of the 1980s was particularly difficult. Through it all, Kelly came to gain an immense appreciation for Kansas farmers and ranchers.

“I gained an overwhelming respect for the people in agriculture in this state,” Kelly said.  “People in this state truly are stewards of the land.”

He built a strong relationship with his listeners. “A special bond exists between farm broadcasters and their audience,” Kelly said. “No other industry has a network of broadcasters directed only to them.”

One time Kelly and his wife were vacationing on a high speed catamaran off the coast of Canada and he was asked to meet the captain on the bridge. It turned out that captain had been a listener back in Kansas and even presented Kelly an award at an FFA convention.

For many listeners, Kelly became like a member of the family. He’s won numerous awards and was inducted into the Kansas Association of Broadcasters Hall of Fame in 2016.

“The most important thing is caring for the people that you serve,” Kelly said. “Each day our motto should be, what can I do to serve the audience today?”

“Kansans depend on the important information Kelly Lenz has provided to the state's agribusiness industry. Kelly's constant coverage of farm news has been a hallmark of WIBW Radio's service to the people of Kansas,” said Dr. Steve Smethers, interim director of K-State’s School of Journalism and Mass Communications.

Whether it was a ship near Canada or in countless farm family homes across Kansas, Kelly Lenz found that he touched lives with his daily broadcasts. He has made a difference with a lifetime in radio.

Kelly Lenz grew up listening to farm reports on the radio while milking cows in Iowa. He pursued farm broadcasting as a career and recently retired after more than 41 years as farm broadcaster at WIBW radio in Topeka.