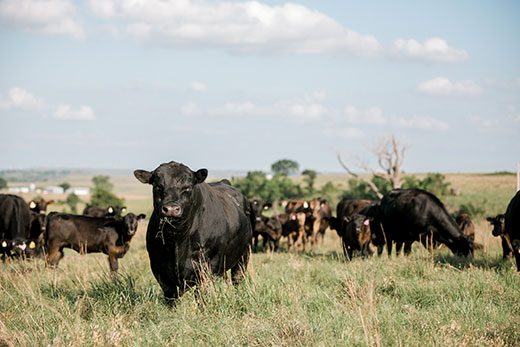 There are many considerations to be factored in when making a bull buying decision. | Download this photo.

Genomic advancements mean more information is available than ever before

MANHATTAN, Kan. – For cattle producers, bull sale season has arrived. Prospective buyers are flipping through the sale catalogs and studying the pedigree information, performance data and bull pictures trying to determine where they want to make their investment.

As genomic advancements have progressed, cattle producers have more information than ever before to help with their selections. But for some, all that data can be overwhelming and make it difficult to know what information they should prioritize.

“Focus first on the economic indexes,” Moser said. He explained that an index is a number that combines trait EPDs (Expected Progeny Differences, which are an estimate of the animal’s genetic merit for a given trait compared to other animals) weighted by their economic impact.

“One of the biggest mistakes producers make with indexes is that they select bulls on one index, but raise the calves under a different scenario,” Weaber said.

Moser explained it further by citing the terminal index. “Think about it as a steer index because it combines growth and carcass traits, but does not include maternal traits such as calving ease and cow longevity,” he said.

While studying the data is an important part of the buying process, Weaber recommends producers do a visual inspection of the cattle.

“While we are improving EPDs and indexes, it is still important to look at the cattle for structural issues so you know that the bulls are sound and will be able to service cows for a long time,” he said.

The experts also agreed that there is some data that producers can discard.

“Don’t focus on the actual weights and measures because those have already been included in the EPDs,” Moser said. Weaber added that the buyer needs to confirm with the seedstock operator that all of the actual data has been turned into their respective breed association so that the purchaser is assured of accurate data.

“I advise commercial buyers to extend that review of data to the dams of the bulls in consideration,” Moser said. “If you are going to base your selections on indexes and EPDs, which you should, then you also need to be working with seedstock producers who are the complete recorders and submitters of the data.”

As producers plan for their upcoming bull purchases, it is advisable that they know what the breeding demands of that sire will be. Age of the bull, terrain, length of the breeding season are just some factors for consideration when trying to estimate that number according to veterinarian Bob Larson.

“The national average is one mature bull for every 30 cows,” Larson said.

Weaber added that yearling bulls will not be able to breed as many cows in season as mature bulls. “Figure out how many months old the bull is at turnout and then follow the rule of one cow per bull for each month of his age,” he said.

Larson also stressed the importance of watching the bulls closely during breeding season to look for signs of their inability to mate.

If there are breeding challenges during the season, Weaber and Larson said that the relationship with seedstock producers in the area will be of importance.

“Most commercial producers will buy cattle within a 100-mile radius of their ranch. I encourage them to get to know their seedstock vendors in their area,” Weaber said. “Get sale catalogs and go look at bulls at a variety of places, and evaluate how those seedstock producers can service your needs.”

Moser added that it is also a good idea for the prospective buyer to visit the ranch of the seedstock supplier outside of the sale day.

“Seedstock producers have high value animals. As the buyer you want to make sure they raise cattle in a similar way to how you do,” he said.

Larson added that commercial customers should consider the services provided by the seedstock operator when making that purchase.

“A lot of breeders provide transportation services but some will provide even more like helping you market your feeder calves and providing connections with others in the cattle chain,” he said.

Moser added: “Write a job description for your bull and then make sure is he qualified for the one you write.”

K-State’s Beef Cattle Institute experts join with a beef cattle geneticist to offer advice on how to make the most of a cattle producer’s investment in a herd sire.

“If you are going to base your selections on indexes and EPDs, which you should, then you also need to be working with seedstock producers who are the complete recorders and submitters of data.”