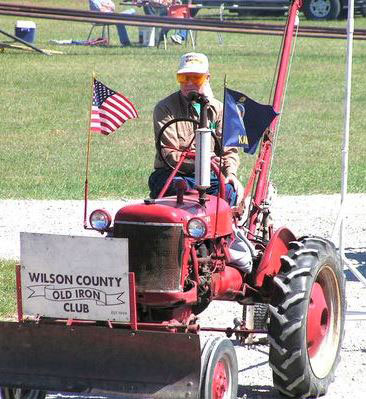 “Old iron.” That’s an affectionate term that farmers have for the old tractors and farm equipment of yesteryear. Those durable old pieces of equipment can serve as reminders of our agricultural heritage and how agriculture still serves our food supply. Today we’ll meet a group of volunteers who are working to share this agricultural heritage with others.

Byron Githens is a founder of the Wilson County Old Iron Club in Fredonia. He grew up in Fredonia, hauling hay and working with farmers. One of the farmers for whom he worked was Rollin Vandever, known as “Red.” Byron appreciated working on the farm, especially with old John Deere tractors.

Byron became a rural mail carrier. He met and married Leanne and bought some used farm equipment of his own.

In 1994, a vacant lot became available next to the city hall in downtown Fredonia. Byron and some friends decided to put on a tractor show so kids could see the old time equipment. It went so well that they decided to do it again the next year. In the following year, they added a threshing machine and a rock crushing demonstration. The annual event continued to grow.

Recognizing the need for more volunteers, Byron and others decided to form a club. In 1999, the Wilson County Old Iron Club formally organized with 25 charter members.  Through the years, the annual equipment show was held in several locations around Fredonia.

Club members quickly focused on ways to educate children in the former ways of farming and farm life. “We want to show the kids how this old equipment worked,” Byron said. The mission of the Wilson County Old Iron Club is “the preservation of our agricultural heritage through education for all ages.”

When a new highway was built near town, it passed through farmland that was owned by the late Red Vandever. The highway route separated some 30-plus acres from the rest of the farmground. Byron Githens saw the potential in that property and he approached Red’s daughter Chris about using it for the old iron club. In the end, Chris and her husband Randy donated the property.

Today, the Rollin “Red” Vandever Memorial Park is the home of the Wilson County Old Iron Club. Multiple buildings have been added, creating a Main Street that looks like a reconstructed village of yesteryear. It also includes a modern community building, constructed with the support of the First National Bank in Fredonia.

This is the site of the annual Old Iron Days Show, held each year on the last full weekend of September from Thursday through Sunday. In its first year, the event hosted Fredonia schoolchildren as well as kids from nearby rural communities such as Neodesha and Altoona, population 414 people. Now, that’s rural. The event has grown to attract more than 2,000 schoolchildren from around the region.

The Old Iron Club is now hosting events throughout the year at the memorial park. A Kansas Heritage speaker series is held during the winter. The club works closely with the Wilson County Conservation District, 4-H, and FFA on events year-round.

“With great community support and involvement, we continue to add exhibits each year and look for ways to find something of interest for every member of the family,” states the club website. For more information, see www.oldironclub.org.

“Old iron.” It’s a way of describing vintage farm equipment, and it’s the name of this non-profit community organization. We salute Byron and Leanne Githens and all the volunteers of the Wilson County Old Iron Club for making a difference by educating youth and the public about our agricultural heritage. Old iron can help build new understanding.

In 1999, Byron Githens and others formed the Wilson County Old Iron Club to demonstrate old-time pieces of farm equipment and educate youth and the public about our state’s agricultural heritage.