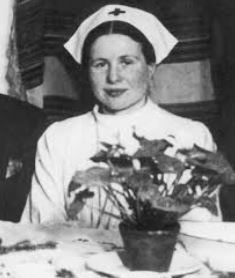 “Who changes one person, changes the world whole.” That quote from the Jewish Talmud was posted in a Kansas classroom where an idea took shape among an inspirational teacher and three high school girls. The idea would develop into a project which would have impact, literally, around the world. It began in rural Kansas.

Norm Conard was a social studies teacher at Uniontown High School. One of his teaching methods was to involve his students in the National History Day competition.  Through the years, nearly 200 of his students received state history awards and more than 60 received national awards. One project in particular had global impact. It was chronicled in a 2011 book titled “Life in a Jar.”

Liz Cambers, Megan Stewart, and Sabrina Coons were students of Mr. Conard’s at Uniontown High School in 1999. He told his students to be thinking about a project on which they could do research for National History Day. Liz Cambers picked up a folder of news clippings to leaf through for ideas. She came across a small story from U.S. News and World Report.

In a few paragraphs, the article told about a Polish social worker named Irena Sendler who smuggled almost 2,500 Jewish children to safety during the Nazi occupation of Warsaw. Liz had never heard of Irena Sendler and neither had Mr. Conard. They figured that perhaps the article had a typo. Maybe she saved 250 children, not 2,500.

Liz decided to look into the history of Irena Sendler. She was joined in the project by two classmates, Megan Stewart and Sabrina Coons. The more they looked into the history, the more amazed they were.

As mentioned, Irena Sendler was a social worker in Warsaw. After the Nazi occupation in 1939, Sendler – who was Catholic, not Jewish herself – observed the plight of Jewish families who were herded into ghettos and ultimately into death camps. She decided to establish a clandestine network to rescue Jewish children.

As conditions worsened, the rescues became even more heart-breaking. Often Irena would have to ask a mother and father to give up their child on the spot, so as to avoid certain death. In later years, Sendler would say, “In my dreams, I still hear the cries when they left their parents.”

The children would be smuggled out of the ghetto and hidden in orphanages, convents, and Polish homes with new non-Jewish identities. Irena kept a private list of their actual names and families and buried the lists in jars in her yard. Nearly 2,500 children were rescued by Sendler and her network before she was captured and severely beaten. The Polish underground arranged for her escape and she survived the war.  When communists occupied Poland, they suppressed her story for another 45 years.

The three Kansas girls were captivated by this story. For National History Day, they wrote a play about Irena Sendler’s life titled Life in a Jar. It won multiple awards. More importantly, it had a lifelong impact on these girls.

They continued their research and made an amazing find: Irena Sendler still lived. With support of Jewish relief organizations and others, Mr. Conard and the girls were able to go to Poland and meet her in person several times.

Since that time, other students have stepped in to perform the Life in a Jar play. It has been performed in locations from Los Angeles to Washington, D.C. and in Europe.  Hallmark produced an Irena Sendler movie. The students have appeared on C-SPAN, National Public Radio, CNN, the Today show, and more.

It began as an idea in Norm Conard’s classroom. It became part of a globally recognized effort to honor this one Polish woman who risked her life to save thousands of children.  We salute Norm Conard and his students for making a difference in this way. “Who changes one person, changes the world whole.”

And there’s more. Norm Conard would go on to direct a nationally known center. We’ll learn about that next week.

Three girls in Norm Conard's social studies class at Uniontown High School uncovered a story about which they wrote a play, which helped spark a world-wide effort to honor a Polish social worker named Irena Sendler, who rescued thousands of children from the Nazis during World War II.