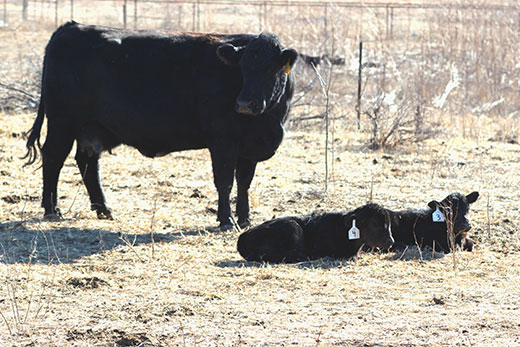 Raising twins can be a challenge for cow/calf producers. | Download this photo

MANHATTAN, Kan. – The goal of every cattle birth is a live, healthy calf, but every so often ranchers find a surprise: a second calf.

Understanding how twins develop and best practices for managing their care was a topic recently discussed by the experts at Kansas State University’s Beef Cattle Institute during their weekly podcast.

“It is estimated that about 2% of beef cattle pregnancies result in twins,” said veterinarian Bob Larson. He explained that twins are the result of either a double ovulation by the cow or an embryo that splits very early in development.

“A cow that was thin at calving but grazed well over the summer will go into breeding season well-conditioned and may have an increased fertility,” Weaber said. He also cited another example of a cow that lost her calf and, thus, was carrying more weight than typical might also be more susceptible to a cycle where she ovulates more than one egg.

“Some twins are not born alive and, even if they are, one can be weak,” he said.

Larson said there are often nutritional differences that happen with calf development during the pregnancy.

“The placenta is the organ that allows nutrients to transfer from the cow to the calf,” he said. “And two calves may not have two equal sized and functioning placentas – resulting in differences in the amount of nutrients the calves receive during the pregnancy.”

Another reason for a calf being born weak relates to the birth process.

“Depending on where calves are located in the birth canal, one can have a normal birth and another could have a much more stressful birth that will decrease its ability to thrive,” Larson said.

Along with that the cow may have a preference for one calf and ignore the other.

“Close monitoring during the calving season can help save those that get rejected as well as increase their life expectancy if they are born in cold, wet weather,” Weaber said.

White added that it is often difficult for a cow to raise both calves. “It is a rare cow that can provide all the nutrition needed for both calves, so producers may need to intervene early after they are born.”

Additionally, cattle producers who have a mixed set of twins, meaning one bull and one heifer, need to be aware of how the male’s testosterone in utero impacts both calves. “Most likely the heifer in that set will not be fertile and we call her a freemartin. She will not be one that producers will want to keep in the herd.”

K-State beef cattle experts say that raising twins can be a challenge for cow-calf producers.

“It is a rare cow that can provide all the nutrition needed for both calves, so producers may need to intervene early after they are born.”