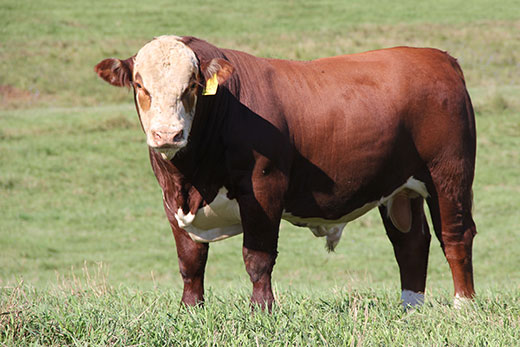 Making sure the bulls are in good health and fertile ahead of breeding season will promote future success. | Download this photo

Getting bulls ready for the breeding season

MANHATTAN, Kan. – Any coach of a winning athlete will say that success in competition is the result of the athlete’s nutrition and fitness preparation. Beef cattle experts at Kansas State University say that same mentality applies to preparing bulls for the breeding season.

“A single bull is responsible for many pregnancies, so it is critical that he goes into the breeding season healthy and fertile,” said veterinarian Bob Larson, speaking recently on the Beef Cattle Institute’s CattleChat podcast.

To make sure bulls are well-vaccinated heading into the breeding season, Larson advises producers to follow similar protocols for females and males of the same age. For example, the heifers and yearling bulls should receive similar vaccinations (except bulls do not receive a brucellosis vaccine), and cows and mature bulls should be vaccinated similarly.

He also stressed the importance of evaluating yearling and mature bulls with a breeding soundness exam prior to the start of breeding.

“That exam will include the bull’s physical health as well as an evaluation of the reproductive tract and semen quality,” Larson said, adding that even with healthy looking bulls, about 10-20% will actually show up as sub-fertile.

Once they’ve passed their health exam, Weaber advised that producers focus on acclimating the bulls to the breeding environment ahead of when they are turned out with the cows.

“The environmental adaptation is really important,” he said. “Bulls that go from a high energy growing ration to dormant winter forage can lose a body condition score. That decline in energy status can have an impact on breeding performance as well as semen quality. This nutritional insult is exacerbated in bulls that were in marginal condition initially.”

Another concern is how the bulls will get along in a breeding pasture.

“Managing the introduction of yearling bulls with mature bulls pre-turnout is important because they will need to sort out a pecking order,” Weaber said. “Oftentimes the bulls can get injured in a fight for dominance.”

He added: “If there is a big tussle going on, human safety is important, and producers need to be careful how they interrupt that. It is important that those bulls are located in a spot where they can be separated as needed.”

Get the bulls introduced and settled before you turn them out with cows. What you don’t want are bulls to be distracted from settling the cows because they are fighting for dominance over who is the king bull.

Health and management tips to get bulls ready for the upcoming breeding season.

“A single bull is responsible for many pregnancies, so it is critical that he goes into the breeding season healthy and fertile.”