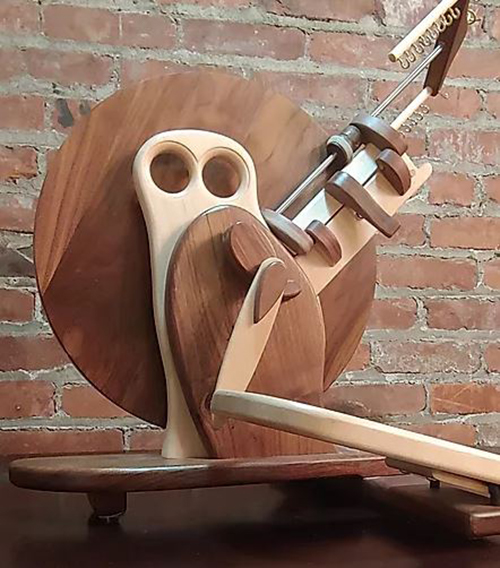 Let’s hop on a transatlantic flight to London. A woman is placing a spinning wheel on the floor in front of her seat and will spin yarn while crossing the Atlantic Ocean. The spinning wheel is a handmade, portable spinning wheel which was built by a pair of craftsmen in rural Kansas. These beautiful spinning wheels are being sold from coast to coast and beyond.

Mark and Julie Lambert are the founders and owners of Athena Spinning, the creators of this beautiful spinning wheel. “Five years ago, I didn’t know spinning wheels existed outside of fairy tales,” Julie said. She and her husband Mark were working as insurance adjusters and living in south Texas. Their job required them to travel on short notice to some disaster scene and then stay for an extended period.

“I saw a woman spinning with a wheel and I was intrigued,” Julie said, having crocheted since she was nine. She and Mark also liked to build their own furniture. He’s an engineer. When Julie said she wanted a spinning wheel, Mark said he would make her one.

The plans went through many revisions. “I thought I was done,” Mark said. Julie wanted one that was just perfect: Attractive, compact, and easy to use and assemble when traveling. When told that his creation looked like a work of art, Mark said with a smile, “That’s her fault. She’s the artist.”

After building 17 models to meet Julie’s requirements for the perfect wheel, they had it.  A friend said that the wheels were so beautiful that they could sell them. Mark and Julie decided to give it a try. Meanwhile, they wanted to move to a location that was situated somewhere between grandkids in Wyoming and Chicago, but not too far north. They settled in Chanute, Kansas.

Their final spinning wheel design has a wheel held by an arm with two fingerholes in the top that resemble the eyes of an owl. As the Lamberts thought about a name for their business, they thought about the owl. Through research, they found that the Greek goddess Athena is a symbol of wisdom, defense of the home, and fiber arts. Athena is often depicted with an owl on her shoulder for wisdom, a shield for defense, and a drop spindle which is the primitive tool used to spin yarn. The connection was so strong they named their business Athena Spinning.

The Lamberts signed up for a trade show to try selling their travel wheels. They brought six wheels in hopes they might sell one or two. By the end of the show, all six were sold.

Today, Mark and Julie Lambert travel the country, selling the Athena travel spinning wheel at fiber festivals from coast to coast. “These wheels are ideal for travelers,” Julie said. The wheel weighs 10 pounds and breaks down into three pieces that nest together and easily fit in a tote bag or overhead luggage. The wheels are eye-catching and attractive, handcrafted from maple and walnut.

Julie loved spinning, but she also needed a break from demonstrating it during festivals. She insisted that Mark learn to spin also. He protested, claiming that “It would not give me joy,” but he finally learned to spin. He now admits, “Spinning is one of the most relaxing things I’ve ever done.”

The Lamberts travel in their RV and take their spinning wheels to shows. “My happy place is to be spinning at my wheel between shows, next to a campfire by a lake at sunset,” Julie said. “Everything about this has been rewarding,” she said, especially the people they’ve met.

One woman in New York City spins during her commute on the subway. The wheels have sold nationwide and as far away as Australia, Canada and Germany.

It’s a remarkable record for a business based in the rural community of Chanute, population 9,119 people. Now, that’s rural.

We commend Mark and Julie Lambert of Athena Spinning for making a difference with their creativity, craftsmanship and skills. This story deserves a lot of positive spin.

After seeing a women spinning yarn, Julie and Mark Lambert built a spinning wheel of their own that they could use while on the road. It worked so well that they are now traveling the nation from their home base in Chanute, Kansas, selling these spinning wheels from coast to coast and beyond.