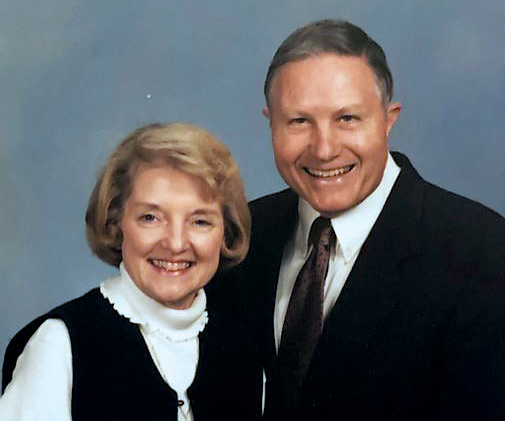 In Kansas, the Boyd family name is synonymous with newspapers. Today we’ll meet a Boyd family member and fourth-generation Kansas newspaperman who’s won numerous honors for his lifetime of dedication to his community.

Dick Boyd and his wife Mary Beth were owners and publishers of the Norton Daily Telegram for 32 years. He continues to write sports for the weekly Norton Telegram.

Dick’s great-grandfather, George Boyd, was the owner of the Kensington Mirror newspaper in the rural community of Kensington, population 473. Now, that’s rural. George’s son Frank learned the newspaper trade as a boy and then went to Kansas State University, where he met and married Mamie Alexander.

In 1907, Frank and Mamie Boyd bought the Phillips County Review in Phillipsburg. They had two sons: McDill, who was nicknamed Huck, and Frank Jr., who was nicknamed Bus. Both followed in their parents’ footsteps, attending K-State and then launching their own newspaper careers. Huck married Marie Kreikenbaum and joined the Phillips County Review. Bus married Mary Folwell Dexter and they published the Jewell County Record in Mankato, where Dick and his siblings were born and grew up.

Dick Boyd developed a lifelong love of sports. He was so athletic that he earned a full football scholarship at K-State. He earned a degree in technical journalism in 1959 after being named Most Inspirational Player by his football teammates during his senior season. He also married Mary Beth Brooks, a K-Stater from Concordia.

Dick Boyd was commissioned as a second lieutenant and served 2 1/2 years in the United State Army, which included being head football coach of the post co-champion team at Fort Bragg, North Carolina. The Boyds then relocated to Phillipsburg, Kansas, to work with Dick’s uncle, Huck Boyd, at Huck’s newspaper. During his eight years at the Phillips County Review, Dick served as advertising manager, reporter and photographer. In 1968, Dick received an award for best advertising idea from the National Newspaper Association.

In 1981, Dick received the Award for Outstanding Journalism from the Nebraska General Federation of Women’s Clubs. His paper was a frequent winner in the Kansas Better Newspaper and National Newspaper Association contests. He’s been named Media Person of the Year three times by the Kansas Wrestling Coaches Association and recipient of the Oscar Stauffer Award for Sportswriting by the Kansas State High School Athletic Association.

Dick’s approach to reporting focused on regional coverage, the positive aspects of the news, and covering state and local news with a hometown touch. Mary Beth would often step in at the office as needed, serving as substitute news reporter, society editor, or proofreader.

In 2002, Dick and Mary Beth sold the paper with the understanding that he would continue to cover local athletics. In 50 years, Dick missed attending and covering just six Norton High School Blue Jay football games. As another former publisher said, “Dick is unique in the world of sportswriting. He strives for perfection and comes mighty close to achieving that unachievable goal.”

Dick and Mary Beth have a son Larry and a daughter Rebecca Allen. Dick was president of the Native Sons and Daughters of Kansas in 2006.

“As publisher of the Norton Daily Telegram, Dick Boyd was a community booster who had a lot of pride for his paper and his town,” said Gloria Freeland, director of the Huck Boyd National Center for Community Media. “He also covered nearby communities in the county with the same level of enthusiasm and positive energy.”

The Boyd name is synonymous with newspapers in Kansas. We salute Dick and Mary Beth Boyd and all the members of this family for their commitment and dedication to their communities and fellow citizens. For Kansas communities, that is good news.

For four generations, the Boyd family has been affiliated with newspapers in Kansas. Dick and Mary Beth Boyd owned and published the Norton Daily Telegram for 32 years. Dick still writes about sports for the weekly Norton Telegram, continuing an award-winning, community-minded career.