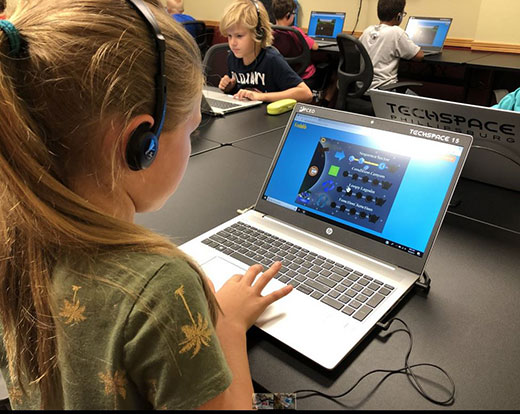 Do you like raspberry pie? I do. Today we’ll learn about a different kind of raspberry pie – the kind spelled P-I, as in the mathematical symbol. In this case, Raspberry Pi is the name of a type of computer used by students who are learning to do computer coding.  This high-tech project is an initiative of an innovative economic development director in rural Kansas.

Nick uses various programs to benefit the county, such as rural opportunity zones, Network Kansas, a commercial revitalization program, and more. In 2018, Nick was in a site council meeting with the Phillipsburg school district when there was discussion about the need to integrate more computer science into education. Forward-looking educators recognized the need for students to have high-tech skills for future careers.

Thanks to Nex-Tech, the local rural telephone company, the community has access to high capacity fiber-optic cable. “Phillipsburg had the benefit of fiber-to-the-premise infrastructure before it reached places like Topeka and Olathe,” Nick said.

He recognized an opportunity to use this capacity and to help students learn high-tech skills. He proposed to his county economic development board that Phillips County Economic Development would partner with the school in a student initiative on computer coding. With the board’s support, PCED bought equipment and online curricula for this project.

Among other things, the younger kids were to work with introductory equipment such as Sphero robots and Lego Mindstorm kits. The older kids were to use training computer modules called Raspberry Pi and Arduino, an open-source electronic prototyping software with which users can create interactive electronic devices such as robots.

The program started with the 2019 academic year. “I expected 25 or 30 students,” Nick said. “Now we have 351 students using TechSpace each week.” The school provides busses to take the kids to and from the Fischer Building.

The younger kids are exposed to the basics of computer coding, which is essentially creating digital instructions to direct a computer to carry out a specific task. The older kids’ class time alternates between online classes and hands-on robotics work.

Some kids practice by writing lines of code to direct robots through a maze. Others are building computer games.

Nick’s ultimate goal is to enhance the students’ skills and benefit the workforce and the families of Philips County. He has reached out to people such as Scott DeLoach, head of K-State’s Computer Science department, who has encouraged the project.

“This is something totally new for (the students), and they love the challenge,” one teacher said.

“This project has worked so much better than we could have ever expected,” Nick said.

Other communities have expressed interest in this initiative also. “It is with small steps such as this, that we could collectively work toward positioning the state of Kansas as the most computer-literate state in the union,” Nick said.

For more information on Phillips County, go to www.phillipscountyks.org.

Do you like raspberry pie? I like the kind from the kitchen. I’m also glad that these students in rural Kansas are using the electronic version. We commend Nick Poels and all those involved with Phillips County Economic Development for making a difference with this futuristic initiative to build high-tech skills. I think the results are delicious.

Nick Poels, the Phillips County economic development director, was at a site council meeting where school leaders identified a need for students to learn more high-tech skills. In response, his office partnered with local schools to launch an initiative which provides a facility and curricula for students from kindergarten through high school to learn computer coding.