HAYS, Kan. – Vipan Kumar, an assistant professor of weed science at the Kansas State University Agricultural Research Center in Hays, received one of the top awards for young professionals during a joint meeting of the Weed Science Society of America and Western Society of Weed Science.

At the annual meeting in Maui, Hawaii, the organizations named Kumar as the recipient of the award for outstanding early career weed scientist. Each year, the group selects one scientist who has earned the doctoral degree within the previous 10 years.

As its name suggests, the award recognizes outstanding achievements in weed science early in the individual’s career, which includes innovative approaches that result in learning, the ability to clearly communicate ideas, excellence in research accomplishments, and more.

“It’s a great honor to be recognized by my peers,” Kumar said.

Kumar, a native of northwestern India, began work at the Agricultural Research Center in 2017. His research includes several weed-related issues, but focuses on herbicide-resistant Palmer amaranth and kochia – aggressive weeds that steal water and nutrients in Kansas cropping systems.

Last year, Kumar’s research team confirmed the first report on a strain of Palmer amaranth in central Kansas that resists the 2,4-D herbicide, one of the most commonly-used broadleaf weed killers.

Since 2017, he has secured more than $1.2 million in extramural grants and contracts to conduct his research. He has published 38 refereed journal articles; written 14 extension articles and technical reports, and 104 abstracts; and documented four new cases of herbicide resistant weeds across the Great Plains.

At the same meeting, Kumar also was recognized by the Weed Science Society of America with an award as an outstanding reviewer. He is currently a reviewer for seven publications: Weed Technology, Weed Science, Pest Management Science, Crop Protection, Agronomy Journal, Nature Scientific Reports and PLoS ONE.

The Weed Science Society of America was founded in 1956 to promote knowledge about weeds and their impact on the environment. 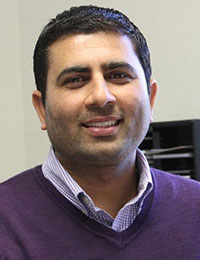