Would you like to learn to fly? How about without a plane? If that sounds impossible, meet Little Apple Aerials. This company’s talented staff demonstrates aerial arts and teaches participants to do gymnastics up in the air, complete with a sensation of flying. 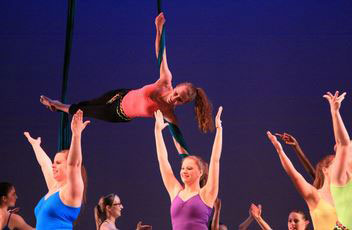 At right: The Little Apple Aerials| Download this photo.

Damian and Heidi Hilton are the founders and owners of this remarkable business known as Little Apple Aerials. Damian grew up at Great Bend, where he enjoyed athletics. “I was picking up a friend after my high school basketball practice and he was at the Barton County Community College facility working with the Barton cheerleaders,” Damian said. The Barton yell-leaders invited Damian to join the squad also. He tried it and became a Barton yell-leader.

Damian went on to K-State. One of his Barton cheer partners was on the cheer squad at K-State and talked him into trying out. Not only did Damian make the squad, he went on to become assistant coach and then head cheer coach.

While at K-State, Damian got a job managing the Manhattan Gymnastics Center. He also coached youth sports. The gymnastic elements of cheerleading became a passion and then a profession.

One athlete that Damian was coaching suggested that Damian call her sister Heidi. “Of course, I didn’t do it,” Damian said. But when Damian and Heidi met later on, they made the connection. Heidi and Damian married in 2004.

Heidi grew up in Manhattan and attended K-State, where she became the featured twirler and then a Classy Cat for the K-State band. She was also a professional dancer who would later tour cross-country with the Music Man troupe.

In 2005, the K-State Dance department hosted a guest artist named Joshua Carlson.  “They needed an expert,” Damian said. “At one point in the performance, he wanted a dancer to fall from a 20-foot-high ladder. The K-State dance staff said, maybe you better call (Damian).” Damian and Joshua became good friends. Joshua helped Damian and Heidi learn more about the art of aerial performance, as practiced in circuses in Europe and Asia.

In 2010, Damian and Heidi started their own business called Little Apple Aerials. The company offers aerial performances for special events, plus classes in the art of aerial gymnastics. Just as gymnasts have routines, aerial gymnasts also perform but do so while suspended in mid-air. The motion can be like flying. “Our aerialists will swing, fly, drop, and ascend,” Damian said. “They will do drops but never fall.”

Safety is top priority. “We will never have someone perform a move high in the air that they haven’t done hundreds of times on the ground,” Damian said. The Hiltons also set up a business called CheerExcel to assist school cheerleading squads.

Little Apple Aerials performs for parties and other events. “When I started, I was used to being the guy underneath, holding the girl up safely,” Damian said. That changed with time. At one performance, Damian was pulled 35 feet up in the air upside down by a chain motor and then Heidi performed a routine where she lay laterally across his feet. “We were the featured aerialists for the show,” Damian said.

Damian and Heidi have trained with professionals at Cirque du Soliel at Las Vegas and Florida. Their son Aidan and daughter Daisy now perform with them also.

Damian and Heidi have performed at various locations, from an audience of thousands at Century II in Wichita to a cheer camp at the rural community of Weskan, population 341 people. Now, that’s rural.

The Hiltons perform and train such techniques as silks, cerceaux, corde’ lisse, and Spanish Web. In June 2020, they will offer their second annual circus camp in Manhattan, where kids can learn the skills of acrobatics, juggling, clowning and more.

Would you like to learn to fly? How about without a plane? We commend Damian and Heidi Hilton of Little Apple Aerials for making a difference by training people in the aerial arts. I hope their business continues to take off.

When Damian Hilton became a yell-leader and then head cheer coach at K-State, he found a passion for increasingly challenging forms of gymnastics. As he learned more about aerial gymnastics, he and his wife Heidi created Little Apple Aerials which performs for special events and offers classes on the aerial arts.