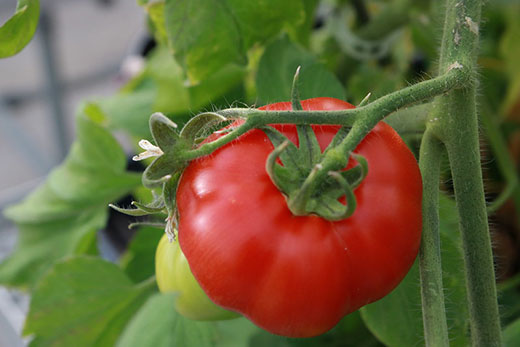 Home gardeners in some parts of Kansas can start planting in early May for bright red tomatoes on the Fourth of July. | Download this photo.

Fourth of July tomatoes? Make a plan for early May planting

MANHATTAN, Kan. – Home gardeners with an eye on being the envy of their neighbors in early July will have an opportunity in a few weeks to get a jump start on planting tomatoes.

Ward Upham, a horticulture specialist at Kansas State University, said that early May is the first chance in some parts of Kansas to get tomato plants in the ground, though it can be a risky venture.

“Tomatoes need a soil temperature of at least 55 degrees to do well,” Upham said. “And plants must be protected from frost.”

Both challenges can be overcome, he said, but both require some planning.

To protect plants from a late frost, Upham suggested placing hot caps or water teepees, two types of protective cones that fit over the young plants. “Eventually the plants will outgrow the cover and start to develop flowers,” he said.

Upham noted that gardeners in the southern part of Kansas can get a head start on tomatoes beginning May 1, while those in the central part can plant on May 10 and those further north by May 15.

Doing so, he noted, would likely produce beautiful, fresh tomatoes by early July.

“If gardeners in central Kansas harvest tomatoes by the Fourth of July, they brag, except for cherry tomatoes,” Upham said. “Usually about mid-July is the normal time in that part of the state.”

Upham and his colleagues in K-State’s Department of Horticulture and Natural Resources produce a weekly Horticultural Newsletter with tips for keeping yards healthy and beautiful year-round. The newsletter is available to view online; interested persons can also subscribe to have it delivered by email each week.

Home gardeners aiming for early July tomatoes should start making a plan to start growing plants in early May.

“If gardeners in central Kansas harvest tomatoes by the Fourth of July, they brag, except for cherry tomatoes. Usually about mid-July is the normal time in that part of the state.”