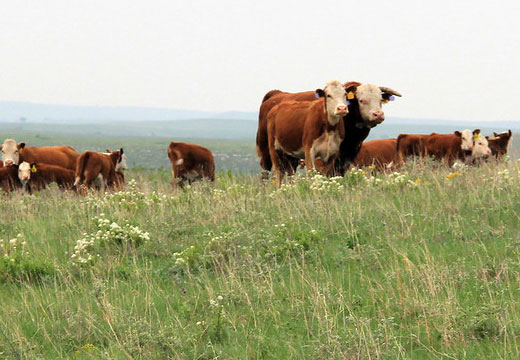 During breeding season, it is important to observe the bulls spending time among the cows.  | Download this photo.

Caring for bulls during the breeding season

MANHATTAN, Kan. – Just as an athlete can experience an injury in competition, so too can a bull when he is turned out in a breeding pasture where his athleticism is going to be tested.

“Bulls will be the busiest in the first month of the breeding season when there are a lot of females coming into heat (estrus),” said Kansas State University veterinarian Bob Larson during the weekly Beef Cattle Institute Cattle Chat podcast.

“At the beginning of the breeding season, about 5% of the cows that aren’t pregnant will be in heat daily,” Larson said, citing an example of a 1:30 bull to female ratio in which, on average, two cows can be expected to be showing signs of estrus each day.

Because of that, Larson said even if the bulls have passed a breeding soundness exam prior to turnout, producers still need to watch them closely once they are in the pastures with the cows.

Common injuries include lameness due to feet and leg issues as well as a broken penis, which can happen when he is mounting a female and another bull shows aggression towards him. Later in the summer when the flies are more active, pinkeye can be a concern.

“A good time to check the bulls is when you are checking on the salt and mineral in the pastures in the early morning or at dusk,” said Bob Weaber, beef cattle specialist with K-State Research and Extension. “If the bull isn’t with the cows but is off in another part of the pasture laying down that is a concern.”

Weaber added it is important to maintain personal safety when working around bulls.

“Mature bulls can be difficult so it is best to observe them from your ATV, pickup truck or on the back of a horse,” Weaber said.

Lameness is easy to notice when the bull first gets up and begins moving around, Weaber said, while Larson added that a bull with a broken penis will show swelling on his underline right in front of the scrotum.

As the breeding season goes on, the physical demands on the bull should lessen.

“After the first 21 days of the season, producers should expect at least half of the cows to be pregnant,” Larson said. “If it’s a month into the breeding season and you see a lot of cows riding each other, that would be the time to have the veterinarian check on him.

Monitoring the bulls in the breeding pasture is important for a successful breeding season, according to experts at K-State’s Beef Cattle Institute.

“A good time to check the bulls is when you are checking on the salt and mineral in the pastures in the early morning or at dusk.”