“I cannot see, but I have a vision.” That statement from a blind educator in Ethiopia might introduce a visionary program through which rural Kansans are helping encourage literacy halfway around the globe. 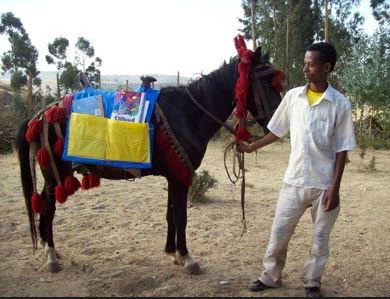 LeAnn and Stan Clark and Laurie Curtis shared the story of this innovative nonprofit organization known as Ethiopia Reads. They told about Jane Kurtz, the co-founder of Ethiopia Reads, who had grown up in Ethiopia where her father was a missionary pilot.  Jane moved back to the United States, married a Presbyterian minister, and became a children’s book writer. Several of her books drew on her years growing up in Ethiopia.

An Ethiopian refugee in the U.S. came across her books and was touched. He contacted Jane and encouraged her to develop literacy in Ethiopia and send children’s books there. That was the beginning of Ethiopia Reads.

Jane Kurtz received a grant from North Dakota Presbyterian churches to gather books and send them to Ethiopia. She and her husband later moved to be near his parents at Moundridge, where they met LeAnn Clark.

LeAnn had grown up in Chapman, where she met her future husband Stan. They both went on to K-State. He was an agricultural engineer, and LeAnn became a teacher in the rural community of Hesston, population 3,709 people. Now, that’s rural.

In 2004, LeAnn was president of the Kansas Reading Association. She wanted her organization to take on an international project. She found such a project when she met Jane and learned about Ethiopia Reads.

Laurie Curtis also joined in this effort. At the time, she was director of the Reading Specialist program in the College of Education at K-State. She is an international expert on literacy and early childhood education. Now retired, she serves on the board of Ethiopia Reads.

“Early literacy is almost nonexistent in Ethiopia,” Curtis said. “They need books to read in order to learn.” LeAnn and Stan Clark took on the task of gathering books to send to Ethiopia. They received donations of children’s books from schools, libraries, and individuals. They sorted and packaged the books. The organization raised funds to send a shipping container of books to Ethiopia.

Meanwhile, Curtis’ colleague, Jackie Spears wrote a grant to bring U.S. teachers to Ethiopia to teach reading skills. They found that the needs in Ethiopia were immense.

Children’s books were almost never present in homes. In the few libraries that existed, the librarian’s typical role was to be a gatekeeper to protect the books rather than helping kids read them. For example, the Americans stopped at one library in Ethiopia and asked where the children’s section was located. “Oh, we don’t have a children’s section,” was the response. “If we did, children might come in.”

Curtis set out to change that mindset and help people in Ethiopia enhance their children’s lives by developing a librarian training curriculum. LeAnn and Stan Clark continued to volunteer to gather, sort, label and ship books.

To date, Ethiopia Reads has started 80 public-, school- and mobile libraries serving 100,000 children annually. The organization has trained 450 librarians and teachers and has donated and distributed 200,000 Ethiopian- and English-language books to more than 350 schools in every region of Ethiopia. In the remote regions, the mobile libraries literally consist of horses carrying books in saddlebags or a book cart pulled by a donkey.

“Training of librarians is so important,” Curtis said. Ethiopia Reads has hosted several training conferences in Addis Ababa. In March 2020, some 170 people attended the Children’s Reading Summit. “A small but energetic Ethiopian staff manages all the Ethiopia Reads programs within the country,” Curtis said.

“We’ve met some amazing people, and we’ve had great community support,” LeAnn said. “We’re accepting books as well as monetary donations. I’m so proud of the way this organization works.”

For more information, go to www.ethiopiareads.org.

We commend LeAnn and Stan Clark, Laurie Curtis, and all those involved with Ethiopia Reads who are making a difference by changing lives through childhood literacy. Their vision is coming true.

Hesston teacher LeAnn Clark was president of the Kansas Reading Association when she learned about Ethiopia Reads, a nonprofit organization seeking to encourage literacy in that African nation. LeAnn embraced the project and still volunteers with her husband Stan in gathering and shipping books to Ethiopia..