Kansas State University is committed to providing equal access opportunity and reasonable accommodation to campus programs and services for faculty, staff and students. If you require accommodation to view or hear a video live stream or archive, please submit a request for accommodation. Students should make their request to the Student Access Center. All others should request accommodation through Human Capital Services.

K-State professor digs hole in backyard to teach about soils

This spring, she added one more: construction equipment operator.

When the COVID-19 pandemic brought all in-person classes to a halt at universities across the country, many faculty members were thrust into finding creative ways to teach courses that were more suited to hands-on learning.

For Presley, who teaches a 500-level soils class, that meant bringing out the heavy machinery.

“I dug a hole in my backyard with an excavator,” she said, referring to the large, diesel-powered construction machine with a bucket for digging out large chunks of earth.

“I had never done it myself before and I wanted to learn, so I did it on a day when no one was watching,” Presley said. “It’s not the best soil pit ever, but I feel a lot more confident now.”

The trench, which measures 12 feet wide and 49 inches deep, became an online classroom for 12 students enrolled in Presley’s soil science class. From the pit in her backyard, Presley recorded a YouTube video in which she delivered a lecture that normally would have been covered in a three-hour, field-based lab. 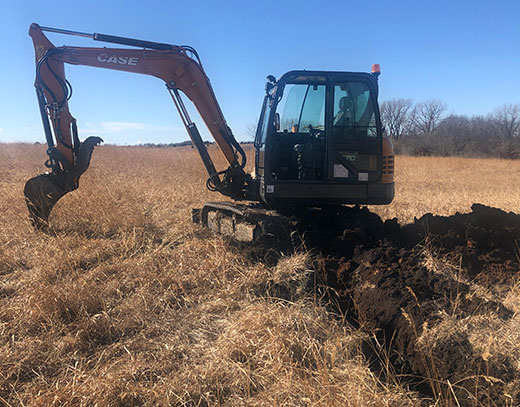 At right: K-State professor DeAnn Presley used an excavator to dig a 12 foot wide trench in her backyard | Download this photo.

“My backyard has really interesting soils,” Presley said. “I have glacial till on top and shale underneath. And there’s no better way to get a good look at that than to dig a hole.”

“I’d rather have the students in the pit with me,” she adds. “But, obviously, that’s not possible right now, so videotaping myself describing soils is as close as I can get.”

Presley’s class provides an important piece of knowledge for the graduate and undergraduate students she teaches. She said knowing where soil comes from, how it is formed and how it varies across landscapes is important for making critical management decisions that affect a variety of land uses – including agriculture and construction.

“As students, the biggest challenge we’ve faced has been not being able to go out in the field to see and touch soil profiles,” said Mikala Postlewait, a sophomore from Shawnee, Kansas. “Dr. Presley does her best at describing the profiles in the video, but I would really like to go out and feel the soil to determine things like color and texture on my own.”

Ordinarily, Presley says the students would take five field trips to various sites around the Kansas Flint Hills. They were able to take one of those trips prior to spring break, but the other four visits have been taught via YouTube videos.

Despite the limitations, sophomore Isaiah Euler says he kind of likes learning about soil from a distance.

“I didn’t feel pressure to just pass the tests, but really got to focus on learning the material well,” said Euler, a sophomore from Overland Park, Kansas.

“I’ve been on the (K-State) soil judging team for two years now and have continued to learn exponentially in this class. I feel like we’ve covered the topics at a great pace and have received a lot of feedback.”

Prior to the shutdown of in-class teaching, Presley said she had never taught an online course, “so I bet I could do a lot of things better.”

But, she adds, “I try to be as accessible as possible. I have been responding to students’ emails, phone calls and texts as quickly as I can because I know they have a lot going on in their classes right now.”

She’d prefer to teach classes in person, but during an unusual time, Presley has found a creative alternative.

“I feel like I’m not teaching them as well as if I was in person,” she said. “When I’m in front of them and if they don’t understand, I can see it all over their faces. When you record and post lectures, it’s convenient for them and for me, but I know there’s stuff that they probably aren’t learning as well as if we were together.”

In addition to videotaping lectures from soil pits, Presley said she has recorded instructions for some homework assignments, and has encouraged the students to do their homework in groups, “because I believe strongly that you learn a subject even better when you teach it to others.”

“A pleasant surprise from teaching online is that when I’ve posted my YouTube ‘virtual soil pits’ on Twitter, I’ve gotten nice comments from other soil scientists,” Presley said.

Presley’s lecture from the soil pit in her backyard can be viewed online.

K-State professor of agronomy DeAnn Presley found a creative way to teach students about soils at a distance during the COVID-19 pandemic: she dug a 12 foot trench in her backyard.

“I’d rather have the students in the pit with me. But, obviously, that’s not possible right now, so videotaping myself describing soils is as close as I can get.”