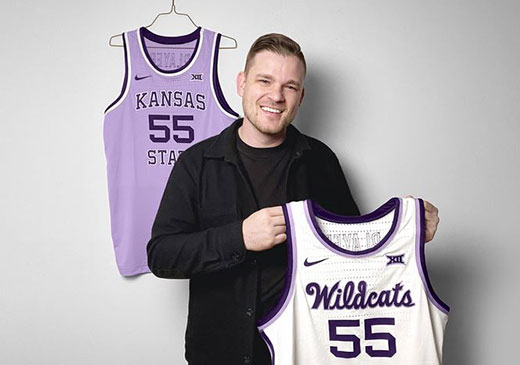 The Los Angeles Rams are unveiling their new uniforms, as designed and produced by Nike, Inc. There is lots of excitement about seeing the new uniforms. This unveiling is an especially exciting moment for Nike’s lead project designer, who happens to come from rural Kansas.

Jason Wright is a lead product designer with Nike, Inc., in Oregon. That’s halfway across the continent from where Jason grew up near Garnett in Anderson County, Kansas.

“My dad was an engineer at Wolf Creek, but he also had a metal and wood shop at home,” Jason said. “Dad (also) restored an old ’72 Chevy pickup.

Jason helped his dad in the shop and worked on designing things of his own. He found he especially enjoyed drawing. “I loved basketball, and Kobe Bryant was my guy,” Jason said. Kobe was the most famous player in the NBA, and kids around the world were admiring Kobe Bryant’s shoes as made by Nike. “I tried drawing what my own ‘Kobes’ would look like,” Jason said. He drew sketches of logos and wheels and shoes.

He even entered some of his drawings in an online competition for amateur shoe designers. By his sophomore year in high school at Garnett, he won that competition. That caused him to receive an email from a designer at one of the Nike companies, encouraging him to pursue his talent.

Jason went on to K-State and earned a degree in graphic design. After graduation, he married a young woman from Topeka and went to work for a firm in Kansas City.

One day out of the blue, he got a call from a Nike staffer who had seen Jason’s work on a website and was interested in recruiting him to work for Nike. “We loved Kansas City, but we couldn’t turn down this opportunity,” Jason said. He estimated that Nike gets thousands of designer applications each month.

Jason went to Oregon for the interview and ultimately accepted a position with Nike in 2015. “I think my appreciation of graphics for sports fans gave me an edge,” Jason said.

Today, he is a senior designer with Nike, with responsibility for collegiate and professional sports products. His work has taken him to stadiums, arenas and cities all over the world, including the most recent Super Bowl game, for example. “I’ve traveled to so many college towns,” Jason said. He still believes Manhattan is a special place.

The Los Angeles Rams of the NFL are preparing to move into their new stadium in L.A., complete with a new logo and new uniforms. Jason worked on the new logo and uniforms for Nike. “That’s probably the most high-profile project I’ve been responsible for,” Jason said.

His work has taken him around the globe. “I’ve been to factories all over the world,” Jason said. “It’s been a cool opportunity for a small-town kid from Kansas.” After all, Jason grew up in a rural area between Garnett, population 3,415, and Westphalia, population 163 people. Now, that’s rural.

“I appreciate the environment I grew up in,” Jason said.

It’s time to say goodbye to Los Angeles, where a new logo and uniforms were unveiled as designed by a designer who is originally from rural Kansas. We commend Jason Wright for making a difference by putting his creativity into action. From small town Kansas to an NFL franchise, it’s a type of dream career – just the way I would design it.

As a kid in small town Kansas, Jason Wright loved drawing and loved sports so much that he even designed what his own basketball shoes might look like. He would go on to a career with Nike, Inc., designing logos and uniforms for collegiate and professional teams across the nation.