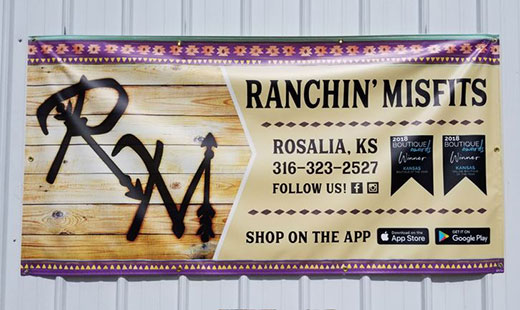 “Looks like we’re nothin’ but a bunch of ranchin’ misfits,” the mother light-heartedly kidded her little girls as they laughed while doing chores on the ranch. That memorable phrase would become the name of a remarkable, award-winning business in rural Kansas.

Shelly Decker is the owner and operator of this business known as Ranchin’ Misfits. She was raised on a Flint Hills ranch. After graduating from Pratt Community College, she came to Kansas State University where she joined the rodeo team and competed in rodeo events. “I loved it there,” Shelly said.

After graduating with a degree in animal sciences and a business minor, Shelly managed a western wear store in Pratt before managing a similar store in Cottonwood Falls. She got married in 2013. Her husband is ranch manager for the Matador Cattle Company. They now have three little children.

In October 2014, bad news hit. Shelly’s mom was diagnosed with cancer. “I wanted to help, so I started selling some jewelry and purses,” Shelly said. She used the proceeds to help with her mom’s care. “I went to a couple little events, and people seemed to like what I had,” she said. Shelly’s mom passed away in 2017.

Meanwhile, Shelly had begun selling her products online from her basement. In 2015, she officially started her business, selling clothing and accessories. What should the business be named?

One day while doing chores with her little daughters, Shelly had jokingly said that they all looked like a bunch of ranching misfits. The phrase made them laugh, and it did so again when it was repeated to Shelly’s husband at supper. It was a memorable phrase, and Shelly decided to name her business Ranchin’ Misfits.

Today, Ranchin’ Misfits is a boutique store offering women, men, and kids clothing, jewelry and handbags, shoes and more. Many of Shelly’s hand-selected products have a western theme. For example, I like the t-shirt that says: “Country Folks – Socially Distancing Before It Was Cool.”

She opened a store in Rosalia. The store is typically open on weekends, but her sales are primarily online.

“We had good timing,” Shelly said. Her company was offering Ariat shoes just at the time that this casual shoe brand was booming in popularity. She became the second-largest Ariat seller in the state of Kansas.

The use of modern technology in general and social media in particular was key to her business. “Facebook was really important for us,” Shelly said. There are now 18,000 members in her Facebook group. She has even developed a mobile app for her business.

“I never dreamed it would grow the way it has,” Shelly said. “We have shipped to every state except Alaska.” That’s an impressive record for a company based in the rural community of Rosalia, population 171 people. Now, that’s rural.

“I want to give back,” Shelly said. She recently led an effort to raise $60,000 for a cancer research project in her mother’s name. “Thank goodness for good friends and family,” Shelly said.

Ranchin’ misfits. That was a funny term for Shelly Decker to describe herself and her daughters, but it has turned into the name of a leading online boutique business. We commend Shelly Decker and her family for making a difference with online entrepreneurship. For rural Kansas, it’s a great fit.

Shelly Decker started selling purses and jewelry to help her mom after her mother was diagnosed with cancer. That enterprise turned into a boutique business named Ranchin’ Misfits which is now selling products across the nation.