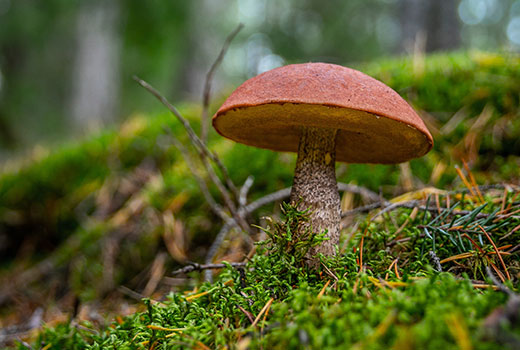 Mushrooms can be spectacular in size and color, but they are generally unwelcome in most home landscapes.

Mushrooms in lawn could be problem, says plant expert

Recent rains have increased incidence of fungus in home landscapes

MANHATTAN, Kan. – They can be spectacular in size and color, but most homeowners aren’t particularly thrilled when mushrooms pop up in their lawns and landscape beds.

“Some of these mushrooms are associated with arc-like or circular patterns in turfgrass called fairy rings,” said Ward Upham, a horticulture specialist with Kansas State University, who noted that late May and early June rains in parts of Kansas have increased the incidence of mushrooms in home landscapes.

Upham said fairy rings are caused by mycelium, or the thread-like vegetative part of fungus.

“The mycelium forms a dense, mat-like structure in the soil that decomposes organic matter,” he said. “This decomposition releases nitrate into the soil, which in turn stimulates the growth of grass at the outer ring.”

The problem, Upham notes, goes well beyond aesthetics. The thick mat formed by the fungus may interfere with water getting into the soil (infiltration), and the fungus can release by-products that are toxic to turf, causing it to die in the area close to the ring.

The ring may be evident by a darker green or brown color on the outside edge, according to Upham.

“Fairy rings are difficult to control,” he said. “You can sometimes eliminate the ring by digging to a depth of 6 to 12 inches and 12 inches wide on both sides of the ring, then refilling the hole with non-infested soil.

“Or, you can try to mask the symptoms by fertilizing the rest of the lawn so that it is as dark green as the ring. That often isn’t a good idea, though, because it tends to promote other turf problems.”

Some commercial fungicides can be effective on fairy rings, though they are not available to homeowners. More information on these fungicides is available in the K-State Research and Extension publication, Fairy Rings in Turfgrass.

“Some mushrooms in lawns are not associated with fairy rings,” Upham said, noting some varieties are associated with tree roots or live on dead organic matter such as wood. “Some of these mushrooms are beneficial, so you don’t really want to kill them.”

If mushrooms are a nuisance, Upham said the simplest method to get rid of them is to pick and dispose of them as soon as they appear. “If there are too many for that to be practical, mow them off,” he said.

“Mushrooms tend to go away as the soil dries, so patience may be the best control,” Upham added. “Some mushrooms in the lawn are edible, but others are poisonous. Never eat mushrooms from the yard unless you are sure of their identity.”

Upham and his colleagues in K-State’s Department of Horticulture and Natural Resources produce a weekly Horticulture Newsletter with tips for keeping yards and gardens healthy and beautiful year-round. The newsletter is available to view online or can be delivered by email each week.

Interested persons can also send their yard and garden-related questions to Upham at wupham@ksu.edu.

They can be spectacular in size and color, but most homeowners aren’t thrilled when mushrooms pop up in their lawns and landscape beds.

“Fairy rings are difficult to control. You can sometimes eliminate the ring by digging to a depth of 6 to 12 inches and 12 inches wide on both sides of the ring, then refilling the hole with non-infested soil."