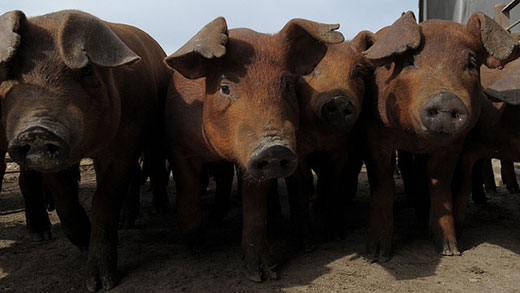 K-State researchers have studied the effects of low-protein diets on slowing pigs' growth, a management strategy that could be valuable during a pandemic or other market disruptions.

Findings are important for times when markets are disrupted, such as pandemic

MANHATTAN, Kan. – Kansas State University swine researchers are reporting results of a study in which they were able to help producers slow the growth of pigs during the COVID-19 pandemic while they waited for packing plants to re-open.

Their findings, they say, could be important any time markets are disrupted, whether that be for a global pandemic or other industry challenges.

Mike Tokach, a swine nutritionist with K-State Research and Extension and one of the lead investigators, said the study focused on reducing protein sources – namely amino acids – from the animals’ diet. They focused on pigs weighing 200 pounds, targeting the last 70 to 80 pounds those animals needed to reach market weight.

“We were able to buy 3 1/2 to four weeks of extra time to get those pigs to market,” Tokach said. “As many know, that was really crucial when we were going through some of the slowdowns (at packing plants, which caused a backlog of pigs on farms). Buying that extra 3 1/2 weeks allowed some of our producers to keep their pigs on the farm longer, while not getting them too heavy and still fitting into the packer’s window in terms of weight ranges.”

Amino acids are the building blocks for animal protein, or muscle, and are beneficial to a pig’s growth. Lysine is an important amino acid often used in pigs’ diets.

“If we limit the intake of amino acids, that animal simply isn’t able to grow as fast,” said K-State swine nutritionist Joel DeRouchey. “Ultimately that was our goal: to slow down growth while they’re still consuming a full amount of feed.”

“Ultimately what we found through this research is when the pigs were on a slow diet, we reduced their growth performance fairly substantially,” DeRouchey said. “In fact, they were about 14 pounds lighter at the end of the 44-day finishing period by feeding reduced levels of amino acid.”

He added: “Interestingly, when we put them on a slow diet then moved them to a corn-based diet, they gave up another 12 pounds, or were about 26 pounds lighter after a 44-day feeding period, which is very substantial. Those diets achieved the goal of holding those pigs while they’re still consuming a full amount of feed.”

Tokach said there were several positive outcomes of the study.

“One that producers have foremost in their minds is the welfare of the animal,” he said. “You want to do something that’s not going to harm the pig while…producing a safe and wholesome food product at the end.”

The researchers also noted that while some swine producers in other Midwest states made the undesirable decision to euthanize animals this spring, they are not aware of any Kansas producers that went that route. Many of those producers, they said, were using the holding diets prescribed by K-State’s swine nutrition team.

“One thing we learned is that you don’t want to start these low-protein diets too early,” Tokach said. “If we start them too early in the pig’s life, when they have very high levels of protein deposition, we can cause some vices (problems) to occur, and that’s when you have some difficulties on the animal welfare side. But if we start those diets after they are 200 pounds or heavier, we have not seen any adverse effects with the pigs.”

DeRouchey noted that one consequence of keeping the pigs on the farm longer is that feed efficiency – or the average cost of feed per pound of gain – is poor compared to normal times.

“But when you’re in a situation that you can’t take those pigs to market and they’re already getting close to market weight, your goal is to minimize the cost of keeping those pigs around another day,” Tokach said. “So even though feed efficiency is poor, the cost of that diet is so much lower when we aren’t including protein (amino acids). So, your actual cost per day is lower for the pig that is fed the corn-based holding diet.”

“Hopefully, we won’t have to use a strategy like this in the future, but if we have to, I think we have a pretty good idea of how we can prescribe the levels of performance that we want to achieve,” he said.

K-State swine nutritionists have learned more about using low-protein diets to slow pigs’ growth during a disruption in the market, such as the global pandemic.

“We were able to buy three and one-half to four weeks of extra time to get those pigs to market… That was really crucial when we were going through some of the slowdowns” at packing plants during the COVID-19 pandemic.