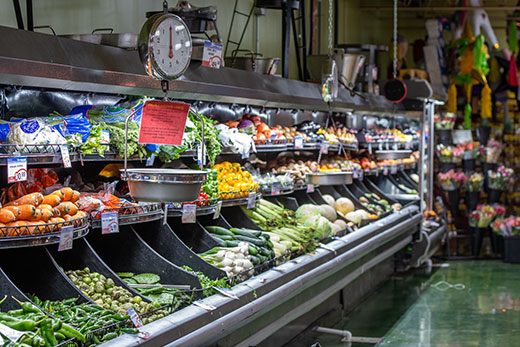 Grocery stores are considered an anchor business in rural communities. | Download this photo.

MANHATTAN, Kan. – A pair of programs that help to provide healthy food to under-served areas of Kansas have found a new home.

The Kansas Healthy Food Initiative and the Rural Grocery Initiative are now directly allied with the statewide K-State Research and Extension network, a change that is being welcomed by the program’s coordinators.

“I have high hopes that this new relationship will expand the reach of both programs and K-State Research and Extension across the state of Kansas and the country,” said Rial Carver, an extension specialist who works closely with both programs.

David Procter, former director of the Center for Engagement and Community Development where the programs were previously located, said the transition makes good sense.

“As we have worked in communities, we’ve reached out to extension professionals who have often stepped up and assisted us with workshops or our summits,” Procter said. “It will be very nice to institutionalize the connection of K-State Research and Extension and this food access work.”

The Rural Grocery Initiative started in 2007 to help sustain and enhance independently-owned rural grocery stores. The Kansas Healthy Food Initiative, launched in 2017, is a public-private partnership that aims to increase access to healthy food in low-resource and underserved areas of the state by providing financial and technical assistance.

It is estimated that there are 200 grocery stores in Kansas communities of 2,500 residents or less. However, Carver noted that from 2008 to 2018, more than 50 rural grocery stores closed in the state.

“That’s 50 cities where residents now have to travel out of town to get groceries,” she said. “Those cities are losing out on economic, social and health benefits due to the loss of their grocery store.”

Since the launch of the Kansas Healthy Food Initiative in 2017, 18 healthy food retail projects have been funded across the state of Kansas and technical assistance has been provided to communities in more than half of the state’s 105 counties.

While the transition is already taking shape, the two programs won’t officially be part of the state’s extension network until July 1, said Gregg Hadley, director for extension.

“K-State Research and Extension has a long history of providing educational programs around food production, systems, policy, and safety,” Hadley said. “We are also deeply involved in educating on the linkages between food, healthy living, and community prosperity and resiliency.

“As such, bringing the Rural Grocery Initiative and the Kansas Healthy Food Initiative under the K-State Research and Extension banner was a natural transition, especially when you consider how we have always been a collaborator with those two initiatives.”

Hadley said efforts to improve access to food are good for rural communities.

“Strong and healthy local food systems are vital to farm and ranch prosperity, healthy people and strong, thriving communities,” he said. “These two programs help to ensure that those things happen.”

The Rural Grocery Initiative and Kansas Healthy Foods Initiative have found a new home with the Kansas extension system.

“As we have worked in communities, we’ve reached out to extension professionals who have often stepped up and assisted us with workshops or our summits. It will be very nice to institutionalize the connection of K-State Research and Extension and this food access work.”