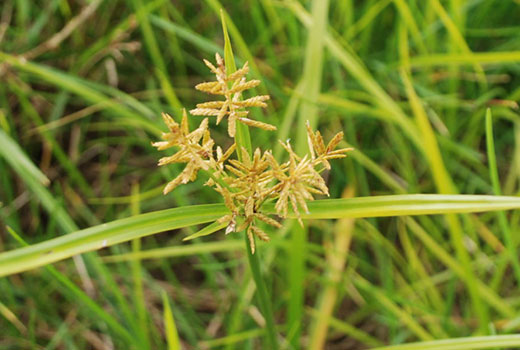 Yellow nutsedge is a weed that is difficult to control once it is in your home lawn.

MANHATTAN, Kan. – Sometimes taking an easier route can be the best way to control a common weed problem in home lawns.

Kansas State University plant expert Ward Upham said that may be the case with yellow nutsedge, a weed with triangular stems and leaves that shoot in three directions.

“Yellow nutsedge is pale green to yellow and grows rapidly in the spring and early summer,” Upham said. “Because of its rapid shoot growth, it sticks up above the rest of the lawn only a few days after mowing.”

Unlike many other weeds, yellow nutsedge is not easily controlled by good old-fashioned hard work, he added.

“Nutsedge is difficult to control culturally because it produces numerous tubers that give rise to new plants,” Upham said. “Pulling nutsedge will increase the number of plants because dormant tubers are activated. It is possible to control nutsedge by pulling, but you must be persistent. Eventually the nutsedge will die, but this will likely take more than one season.”

If you are planning to treat yellow nutsedge with a spray, Upham said it is better to leave the weed undisturbed so that the herbicide can have its maximum effect on the roots, rhizomes and tubers.

He recommends a couple of products for in-season control: SedgeHammer and Hi-Yield Nutsedge and Horsetail Control.

“The SedgeHammer label says to apply after the nutsedge has reached the three- to eight-leaf stage,” Upham said. “Waiting until this growth stage apparently results in improved translocation of the active ingredient to the underground tubers and rhizomes.”

He added that products with sulfentrazone – such as Bonide Sedge Ender, Ortho Nutsedge Killer and Spectracide Weed Stop for Lawns Plus Crabgass Killer – are also effective.

“Research has shown that the first application should go down by June 21,” Upham said. “If the initial spray is after June 21, mature daughter tubers may be stimulated to grow.”

Grubs are small, worm-like pests that feed on grass roots and the organic material in a home lawn, eventually causing sections of the lawn to die. Grubs also become the target of other critters, such as birds, skunks, raccoons, moles and other animals that damage the turf as they dig for their next meal.

“Moles also feed on earthworms, which are not often killed by insecticides,” Upham said. “Therefore, grub control may not result in mole control.”

Even so, the best way to avoid damage is to rid the home lawn of grubs, Upham said.

“If you plan on using a grub preventative on your lawn, the first half of July is a good target date for most products,” he said. “Preventatives are normally used on areas that have had a history of grub problems.”

Upham noted that traditional insecticides – such as Dylox or carbaryl (Sevin) – are normally applied in late July after grubs are present, or as a rescue treatment once damage is already seen.

Products that contain Merit (imidacloprid) are considered grub preventers, Upham said. “Actually, these products do not prevent grubs, but rather kill grubs when they are quite small and long before they cause damage. Merit is safer to use around pets and humans than traditional grub killers.”

“Another grub preventer with the trade name GrubEx contain chlorantraniliprole,” Upham said. “Though this product is very effective, it is less water soluble than imidacloprid. It should be applied earlier, preferably April or May but applications through June should still be effective.”

All grub products should be watered in soon after application, Upham said.

Upham and his colleagues in K-State’s Department of Horticulture and Natural Resources produce a weekly Horticulture Newsletter with tips for keeping yards and gardens healthy and beautiful year-round. The newsletter is available to view online or can be delivered by email each week.

Interested persons can also send their yard and garden-related questions to Upham at wupham@ksu.edu.

Note: Product names mentioned in this article are for identification purposes only. No endorsement of products is intended.

Timing is important when using sprays to control weeds or other pests in the home lawn, says K-State plant expert Ward Upham.

“Pulling nutsedge will increase the number of plants because dormant tubers are activated. It is possible to control nutsedge by pulling, but you must be persistent. Eventually the nutsedge will die, but this will likely take more than one season.”