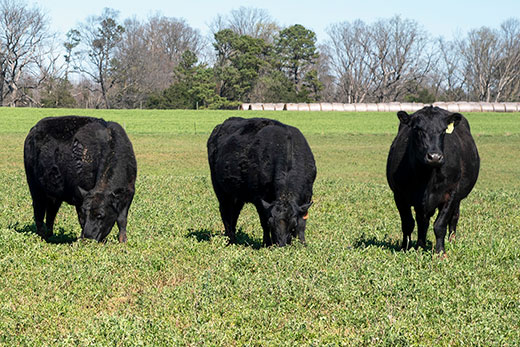 Cattle grazing legumes such as alfalfa need to be managed carefully to reduce the risk of bloat.| Download this photo.

MANHATTAN, Kan. –  If you’ve ever heard the saying, ‘Your eyes were bigger than your stomach,’ you probably know it usually refers to an overindulgence on food, ending up with a bellyache.

Like humans, cattle can unknowingly overeat such grasses as alfalfa and clover and may end up with a serious condition impacting their digestive system — legume bloat.

On a recent podcast from Kansas State University’s Beef Cattle Institute, beef cattle experts talked about cattle bloat, defined as excess gas in the rumen (the largest of the four chambers of the cattle stomach).

“When cattle graze on high quality forages such as legumes, the plants have characteristics that promote frothing. A cow’s saliva is thick and oily, which can usually break down the froth,” said K-State veterinarian Bob Larson. “If there is too much froth production, the rumen fills with gas, putting pressure on the lungs so that the cattle can’t breathe, causing them to die if there is no intervention.”

Larson likened legume bloat to froth on the top of a root beer with many tiny bubbles, which is different than the type of bloat that happens when cattle overeat on grain.

“We typically think of bloat as an acidosis, or free gas bloat, in which the gas can be released with an esophageal tube. But with legume bloat, because it has tiny bubbles of gas, it has to be managed differently,” said Brad White, K-State veterinarian and BCI director.

To prevent this type of bloat, management of the grazing plan is the biggest step. Additional tools are to provide access to a bloat guard block containing poloxalene (a feed additive) that they can lick, or fed a ration containing monensin (an ionophore), said White.

“Cattle will sometimes selectively graze, eating only the leaves instead of the full stem, and that can lead to legume bloat. We can manage that by following an intensive grazing management plan,” Larson said.

One strategy is to group the cattle in narrow strips of pasture where they are required to eat the stems and not just the leaves before they are moved to the next section, Larson said.

Another option is to limit the time the cattle are exposed to the pasture.

It is important to introduce the cattle to the pasture slowly, Weaber said. “To keep bloat from happening, make sure that the cattle aren’t really hungry when you first turn them out because that leads them to want to overeat.”  Providing dry hay or abundant standing forage before turning the cattle in on a field with a lot of alfalfa or clover.

“Then let the cattle graze from mid-morning to mid-afternoon and then pull them off the field,” said Bob Weaber, K-State Research and Extension beef cattle specialist. “The cattle should be allowed to eat hay overnight before putting them back on the pastures the next day.”

To hear the full discussion about legume bloat, tune into the BCI Cattle Chat podcast.

Grazing beef cattle on legumes must be managed carefully to prevent bloat.

“Cattle will sometimes selectively graze, eating only the leaves instead of the full stem, and that can lead to legume bloat. We can manage that by following an intensive grazing management plan.”