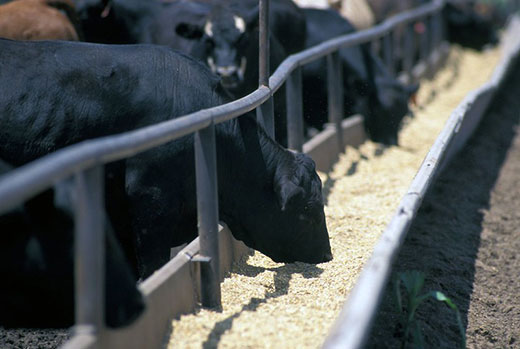 MANHATTAN, Kan. – A Kansas State University agricultural economist has completed an exhaustive study on hedging cattle prices, which he says could help producers manage their economic risks – perhaps especially so in times of crisis.

Brian Coffey looked at the average price of steers and heifers sold in Kansas between 2010 and June 2020 to determine if hedging – a strategy to lock in prices using futures markets – is a reliable strategy for selling live cattle.

“One thing that came out of this will be surprising to a lot of people,” Coffey said. “If we look just at the average price that live cattle would have been sold for from 2010 to 2020, the hedged prices are lower, but they are only 48 cents per hundredweight (cwt) lower than unhedged sales, on average. In other words, the risk-management benefits of hedging come at a fairly lower cost per hundredweight, on average.

“A lot of times, people have in mind that to get the risk-management benefit of hedging, you take a pretty big hit on expected average returns. But over the long term, we’re just not seeing that.”

Listen to an interview with Brian Coffey on Agriculture Today, hosted by Eric Atkinson

Hedging helps to protect against adverse price changes in the markets by allowing a producer who is feeding cattle to establish an approximate selling price now and be protected if prices decline by the time they market those animals later.

Coffey notes that more detailed information on hedging is available at AgManager.info, a website managed by the K-State Department of Agricultural Economics.

In his study, Coffey assumed a feeding period of 160 days while comparing what a producer might have earned on live cattle sales had they hedged those sales instead.

“Basically what I assumed was that a producer would hedge cattle immediately upon placement, then immediately lift the hedge when those live cattle are priced or sold,” he said. “It’s a very disciplined and systematic hedging routine.”

While he found a slight average-price decrease when hedging during normal times, Coffey said hedging can provide huge benefits when disaster hits the industry – such as has happened twice in the past year.

In Fall 2019, a fire destroyed a packing plant owned by Tyson Fresh Meats in Holcomb, Kansas, which had a daily capacity of 6,000 head – or about 6% of the United States’ slaughter capacity.

Coffey compared live cattle prices for 23 weeks, between July and October 2019 to see what impact hedging would have had on producers’ profits.

“What I saw was the hedged price, on average, was about $10 per cwt higher,” he said. “If someone was marketing fed cattle week after week through that same time period, having those cattle hedged was worth an extra $10 per cwt higher.”

Put another way, the average weekly value of gain for hedged cattle was $123 higher per head than for unhedged cattle.

More recently, Coffey also looked at the impact of the COVID-19 pandemic, comparing prices between February 2020 and the end of June. Again, hedging proved to be a successful strategy during crisis.

“The hedged value of gain averaged about $221 per head higher,” Coffey said.

“The take-home lesson from both of those instances,” he said, “is that hedging can protect from scenarios that can, frankly, end a business. Hedging protects against catastrophic losses.”

Coffey’s full report, titled Hedging Kansas Live Cattle: A Summary of Outcomes over the Past 10 Years, is available online at Agmanager.info.

Agricultural economist Brian Coffey looked at 10 years of data to determine if hedging – a strategy to lock in prices using futures markets – is a reliable strategy for selling live cattle.

“A lot of times, people have in mind that to get the risk management benefit of hedging, you take a pretty big hit on expected average returns. But over the long term, we’re just not seeing that.”