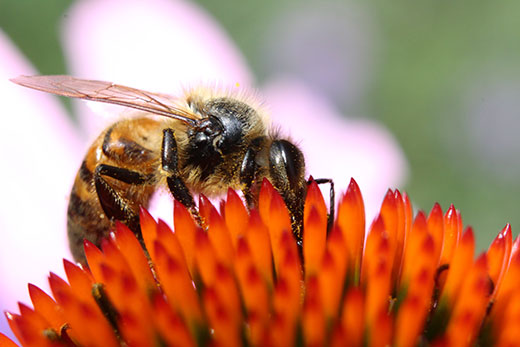 Bees are an important pollinator for garden fruits and vegetables.

When plants don’t produce fruit, too much fertilizer or lack of pollinators may be issue

MANHATTAN, Kan. – Most folks won’t complain about pretty flowers in their garden … except when they’re expecting fruit or vegetables instead.

Kansas State University horticulture expert Ward Upham said it is common this time of year for food plants to bloom without setting fruit.

“There are several possible reasons for this,” he said. “One of those is that the plant has been over-fertilized. Too much nitrogen causes the plant to emphasize vegetative growth, often to the detriment of fruit production.”

Upham said the problem of too much fertilizer is commonly seen with tomatoes. The plant may look healthy, but it is has no flowers that produce fruit.

He added that night-time temperatures below 50 degrees Fahrenheit or above 75 F, or daytime temperatures above 95 F with hot, dry winds can also keep plants from producing fruit. Cherry tomatoes are often more forgiving of high temperatures than the larger slicers.

For vine crops, such as cucumbers, watermelon, squash and muskmelons, “look for the presence of bees visiting those plants,” Upham said.

The early flowers on those plants are usually all male, he said, though the production of male and female flowers becomes more balanced as time passes. “You can easily tell the difference between the two because only the female flower has a tiny fruit behind the blossom,” Upham said.

“If you have both male and female flowers, have not over-fertilized and are still having a problem, make sure you have pollinators working in your garden,” he said.

“If you don’t see any bees, try hand-pollinating several flowers by using a painter’s brush to transfer pollen from the anther of the male flower to the stigma of the female flower. If you get fruit on only those flowers you pollinated, then you need more pollinators.”

For those who use insecticides on vine crops, Upham warned against using too much, which can kill the pollinators. “If you must use an insecticide,” he said, “spray near dusk when the flowers have closed.”

Upham and his colleagues in K-State’s Department of Horticulture and Natural Resources produce a weekly Horticultural Newsletter with tips for keeping yards healthy and beautiful year-round. The newsletter is available to view online; interested persons can also subscribe to have it delivered by email each week.

Interested persons can also send their yard-related questions to Upham at wupham@ksu.edu.

Too much fertilizer or not enough pollinators could be reasons why garden plants aren’t setting fruit, says K-State horticulture expert Ward Upham.

“If you don’t see any bees, try hand-pollinating several flowers by using a painter’s brush to transfer pollen from the anther of the male flower to the stigma of the female flower. If you get fruit on only those flowers you pollinated, then you need more pollinators.”