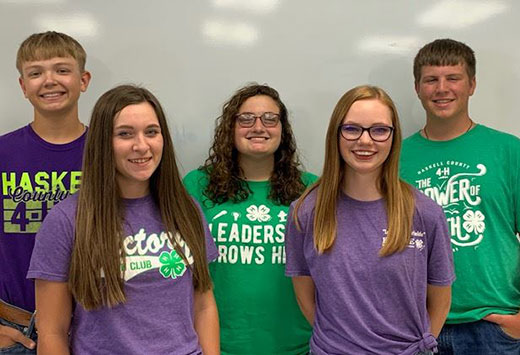 “Never underestimate the power of youth.” That is the phrase used by an extension agent whose 4-H youth helped conduct an innovative livestock show entirely using technology.

Lacey Noterman is a livestock and youth extension agent for the K-State Research and Extension Wild West District, serving Haskell, Seward and Stevens counties in southwest Kansas. A native of Dighton, she was on the livestock judging team at Fort Hays State before joining the extension service in Haskell County.

In 2016, Lacey helped launch a 4-H livestock ambassador program in Haskell County. This was intended to give youth a bigger voice in livestock-related 4-H activities and help prepare them as advocates for animal agriculture. Ambassadors are selected annually by the livestock show and sale committee. “(To avoid favoritism,) I remove the names from the applications and then the committee makes the selection,” Lacey said.

Each year the ambassadors conduct a community service project, communicate with other members and families, and help with county fair and related projects. In October 2019, a new class was selected consisting of Ashley Kennedy, Sean Wagner, Dalton Winfrey, Kara Kunselman, and Bailey Briggs. They represented communities in the area such as Sublette, Satanta, Copeland and Moscow, a rural community of 310 people.  Now, that’s rural.

This group was preparing for Haskell County’s 2020 spring livestock show when the pandemic forced its cancellation – a major disappointment.

“The kids came to me in March and suggested that we should have a virtual spring livestock show,” Lacey said.  “I told them, ‘Go for it.’”

What in the world is a virtual livestock show? It consists of video entries depicting a 4-H or FFA youth displaying their animal, which is evaluated by a judge just like in a regular show. The judges evaluate the livestock, decide on placings in each class, and then give oral reasons for their placings. In this case, the evaluation is done based on videos submitted by the youth and posted on Facebook, and the reasons are recorded in an audio file to be played during the virtual show.

This required lots of technology. “They had to teach Lacey all of this,” Lacey said with a smile. They used a program called Animoto for video editing, Google Classroom for registrations, Paypal to handle fees, and Facebook to view the show.

“The kids were amazing,” Lacey said. “They created the registration form in less than an hour, did a lot of the work, and were constantly promoting it on social media,” she said.  The show was open to 4-H and FFA members across Kansas. Entries were due by May 25. Ultimately, 221 head of livestock were entered. The results were posted on June 9.

“The judges were so great to work with,” Lacey said. They recorded their reasons so that every exhibitor got feedback about his or her animal. “That’s the purpose of a spring show, to help our kids learn and get better,” Lacey said.

The project was definitely time-intensive. “It was much more time-consuming than hosting a live show,” Lacey said. Since there were five judges and five ambassadors, she assigned each ambassador to work with a particular judge. “They learned a ton of life skills,” Lacey said.

“It was awesome to work with this group of kids,” she said. “They still had their online classes to finish too,” she pointed out. “Not only did they excel on the technology side, they excelled and exceeded my expectations in working with the community,” she said.

Due to the restrictions of the pandemic, Lacey was not available to meet with the youth in person.

“This was their baby,” Lacey said. “It forced me to step back, and I got to see what these kids could do,” she said. “It was the best learning experience of my career as a county agent,” she said.

“Never underestimate the power of youth,” Lacey said in describing the county 4-H livestock ambassadors who carried out this idea. We salute Lacey Noterman, Ashley Kennedy, Sean Wagner, Dalton Winfrey, Kara Kunselman, and Bailey Briggs for making a difference with their innovative project. Their results are powerful.

When the Haskell County spring livestock show was canceled due to the pandemic, the county 4-H youth livestock ambassadors suggested to extension agent Lacey Noterman that the county conduct a virtual livestock show. Through lots of work, technology, collaboration and youth leadership, the show was conducted entirely virtually.