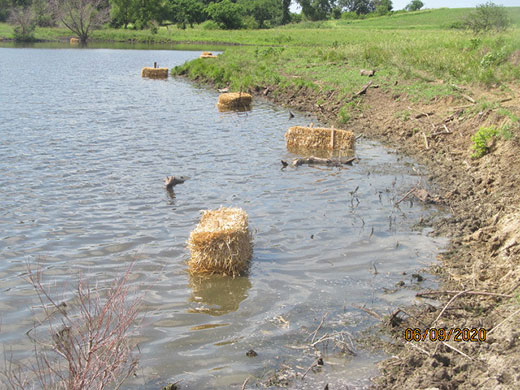 K-State Research and Extension, the Kansas Department of Health and Environment and other state and local agencies are conducting a study focused on using barley straw to mitigate the effects of blue-green algae in farm ponds and lakes in northeast Kansas. | Download this photo.

HOLTON, Kan. -- In her day-to-day work as an extension agent in northeast Kansas, Jody Holthaus often gets calls from landowners looking for information and solutions for blue-green algae – a phenomenon that renders ponds and lakes unsafe for people and animals.

Blue-green algae, or cyanobacteria, are aquatic organisms that exist naturally in freshwater lakes and ponds but sometimes reproduce rapidly, creating a dense growth called a bloom. The blooms can be toxic.

Cattle deaths have been reported in Kansas this year and the deaths of seven dogs in three states last year were linked to blue-green algae.

The problem often shows up in the heat of summer when a combination of nutrients from farm fields wash into bodies of water, fueling growth of the algae.

“This has been a real problem for me the last few years, with few answers,” Holthaus said.

So she and Extension Watershed Specialist Will Boyer began searching for more information and reaching out to state agencies, including the Kansas Department of Health and Environment. She knew KDHE had been involved in blue-green algae testing on large lakes.

“We wanted to do some sort of research or demonstration on smaller farm ponds,” Holthaus said. The next step involved setting up a pilot project through a collaboration with the KDHE, partnering with Elizabeth Smith, director of the Bureau of Water.

Using previous studies as a starting point, the project involved placing bales of barley straw at least halfway submerged around the edge of ponds known to previously have had blue-green algae. The earlier work on larger bodies of water indicated that when barley straw decomposes, polyphenols and other chemicals are released that suppress the growth of harmful algal blooms, or HAB.

Barley straw bales used in the study were located in western Kansas and a cooperative project was started with Shawnee County Parks and Recreation, the U.S. Army Corps of Engineers and K-State Research and Extension. It involves eight privately-owned ponds stretching across Jackson, Jefferson, Nemaha, Shawnee and Greenwood counties. The ponds range from one-half to three acres.

Holthaus said researchers have found that the compounds resulting from the decomposing barley straw will not kill existing blooms but can suppress growth of new ones.

KDHE is testing the water in the eight ponds monthly until October to monitor nutrients and other components that contribute to blooms and to learn how water turnover (dilution), algal species present in the pond and other factors affect success in suppressing the algae’s growth.

“So far the results appear to be promising,” Holthaus said, “but we’ll have to rely on the scientific data analysis to know for sure. Meanwhile, a local producer of barley straw has been located for future study.”

More information about blue-green algae is available on the Kansas Department of Health and Environment Harmful Algal Blooms page, including a list of public lakes and their status.

K-State Research and Extension has teamed with state and local agencies to conduct a study aimed at mitigating the growth of blue-green algae in farm ponds and lakes.

“So far the results appear to be promising, but we’ll have to rely on the scientific data analysis to know for sure.”

Identification and Management of Blue-Green Algae in Farm Ponds