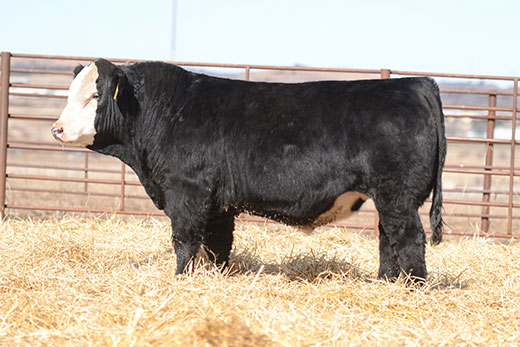 Selecting the optimum sire for the herd involves more than just evaluating his phenotype. | Download this photo.

MANHATTAN, Kan. — In any team sport, members contribute their physical strengths to help achieve the goal for the common good. It is hard for an athlete to be the best in all aspects of the game.

In much the same way, bulls that excel in maternal traits are not always the ones that reach the top of chart for siring calves that rank the best at the time of harvest.

“With many purebred breed associations, bulls are measured for 12-15 traits. While a few bulls will excel in multiple traits, it is nearly impossible to have a bull that can be a leader in all the traits,” said Bob Weaber, Kansas State University beef cattle extension specialist, during a recent Beef Cattle Institute, Cattle Chat podcast.

One tool that is used by purebred and commercial cattle producers is the Expected Progeny Difference (EPDs).

“EPDs offer a relative comparison of genetic merit in any given trait,” Weaber said.

He added that the environment in which the cattle are raised will also influence the weaning weight of the offspring.

“Along with the EPDs, the production environment also drives a lot of the variation observed in an animal’s performance, but there is a portion of that variation in performance that is under genetic control and the heritability is the expression of that relationship between genetic and phenotypic variation,” Weaber said.

There is a lot of information available to producers when making bull selections. Weaber offers the following advice to those who are new to the business.

“Go out and look at your respective breed association’s website and you’ll find really detailed descriptions about each trait,” Weaber said.

There are some common traits across many breeds. Here are the key ones Weaber encourages producers pay attention to depending on the goals of their breeding program.

Weaning and Yearling Weight — These are two EPDs that describe the adjusted weight of the pounds of calf at weaning and yearling ages, respectively.

Marbling — This a terminal carcass trait that predicts the amount of ribeye marbling a beef animal will have at harvest.

“The bottom line is that producers need to focus on things that are economically important to their operation,” said Brad White, BCI director and veterinarian.

To help producers connect to the economically important data, Weaber advises his clients to look at indexes when making sire selections.

“Indexes are basically EPDs for profit at a particular endpoint,” Weaber said. He cited the examples of the $Maternal Weaned Calf Value versus the $Beef Value index both reported by the American Angus Association.

“The $M index reports a profit value difference between calves of a particular bull to the weaning endpoint, while conversely the $B is a terminal index that puts no economic weight on maternal traits. So, if you are selecting bulls to produce terminal calves, retaining none of the heifers, and you own them throughout the value-based marketing chain, then prioritizing $B is a great way to simplify your selection emphasis.”

He added: “Indexes are an important tool because they have economic weightings to them and it will balance the tradeoffs between the traits.”

To hear the full discussion about EPDs and indexes, listen to the BCI Cattle Chat podcast online.

Expected Progeny Differences and sire indexes are tools that producers can use in making sire selections for their herd. K-State Beef Extension Specialist Bob Weaber offers tips on how to use them.

“EPDs offer a relative comparison of genetic merit in any given trait.”