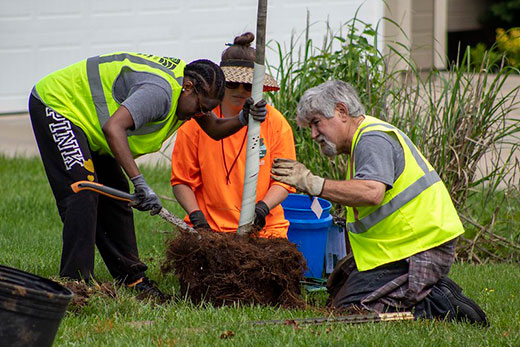 Fall is often a time when landowners plant trees and shrubs in rural and community landscapes. Kansas Forest Service officials encourage landowners to plant a diversity of species. | Download this photo.

Plant a diversity of trees to improve resilience

Kim Bomberger, a community forester, said landowners and homeowners should plant a variety of trees in the landscape to reduce the vulnerability of tree canopies to pests, disease and climatic stressors. Fall is often a time when landowners plant trees and shrubs in rural and community landscapes, she said.

“Fall is a great time to plant and by branching out to choose trees not already present in our yards, neighborhoods, woodlands or agroforests, we are building defenses against future catastrophic loss,” Bomberger said.

One insect in particular, Emerald ash borer, is having a devasting impact on community and rural forests in northeast Kansas.

The wood-boring insect attacks and kills all species of North American ash. The devasting effect of the insect is especially apparent in communities and rural landscapes where the tree canopy contains a large percentage of ash trees – sometimes up to 25% of the tree canopy - which were planted in high densities for shade trees.

First discovered in Wyandotte County in 2012 by the Kansas Department of Agriculture, EAB is now confirmed in 10 counties including Atchison, Doniphan Douglas, Jackson, Jefferson, Johnson, Leavenworth, Miami, Shawnee, and is suspected to be present in several others.

EAB is not the only insect of concern for KFS foresters, Bomberger said.

“We must learn the lessons of monoculture and low-diversity planting,” she said. “Communities and rural landscapes with large populations of maple, for example, could be devasted if the Asian longhorned beetle is transported to Kansas.”

The Asian longhorned beetle has been found in four eastern states: New York, South Carolina, Massachusetts and Ohio. Much like EAB, ALB is a wood boring insect that will eventually kill the host tree. Trees at risk from ALB include many species found in Kansas. The USDA Animal and Plant Health Inspection Service predicts that ALB could be more damaging than Dutch elm disease, chestnut blight and gypsy moths combined with the potential to destroy millions of acres of hardwood forests.

Trees threatened by EAB and ALB can be treated to ward off the invasive pests, but treatment can be costly and is not guaranteed to save the tree. Without preventative treatment, preferred host trees are likely to be killed by an infestation.

Given the cost of treatment and high mortality rate of trees targeted by the invasive pests, planting a diversity of tree species is one of the best options for landowners to reduce the vulnerability of their forests and windbreaks.

“While working in garden centers early in my career, people would ask for trees they knew the names of, or they had seen in their neighbor’s yard. When it comes to trees, it is good to be different. Go out of your way to select a type of tree not already found on your landscape or neighborhood,” Bomberger said.

While insects and disease can devastate a population of trees comprised of one or a few species, severe storm events, drought and other weather extremes also threaten canopy coverage throughout the state. Despite times of abundant rainfall, the lingering effects of past drought and climatic stressors are apparent to foresters. Several large trees have died in the last several years, leaving large voids in community canopies, windbreaks, along streams and rivers and other rural areas.

Bomberger notes when trees are lost, the services they provide to people, communities, homesteads and even production agriculture is lost. The best time to plant a diverse array of trees is this fall, she said.

When it comes to trees, it's good to be different

To see and learn about multiple types of trees that may be suitable for planting in your area, visit the Kansas Forest Service website for multiple resources. For preferred tree lists and technical bulletins visit www.kansasforests.org/resources.

For guidance in picking the right trees for your soil, visit www.kansasforests.org/conservation_trees/soil.html.

Homeowners and landowners should plant a variety of trees in the landscape to reduce the vulnerability of tree canopies to pests, disease and climatic stressors.

“Fall is a great time to plant and by branching out to choose trees not already present in our yards, neighborhoods, woodlands or agroforests, we are building defenses against future catastrophic loss.”