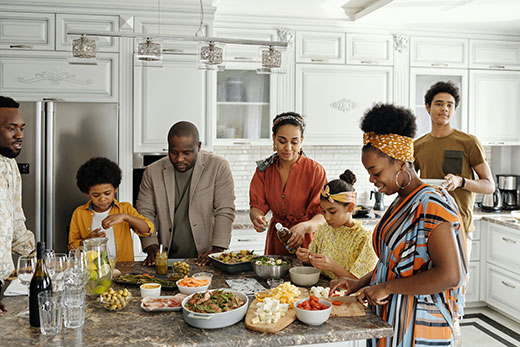 Cooking at home has become more common during the COVID-19 pandemic.

Report outlines how Americans’ eating habits have changed during pandemic

MANHATTAN, Kan. – While it seems like much of the world has changed since the COVID-19 pandemic began, Kansas State University nutrition specialist Sandy Procter says some of American’s eating habits have remained the same.

She cited an annual report called the Eating Occasions Compass from the Hartman Group, a consulting firm that studies the American food and beverage culture. This year, the group reports that while we hunkered down in our homes, we continued to have the same number of meals and snacks as we did before the pandemic began.

“The statistics of when we eat, and what meals and snacks we eat, continue to be identical,” said Procter, who spoke recently on the K-State Research and Extension program, Sound Living.

Listen to an interview with Sandy Procter on the radio program, Sound Living, with Jeff Wichman

Yet, while when we ate remained the same, one not-so-surprising change was where we ate.

According to the report, in-home eating accounted for 88% of all eating and drinking occasions in Spring 2020, an increase of 12% from 2019. The number of occasions in which Americans ate away from home was cut in half – 12% in 2020 compared to 24% in 2019; just 4% of meals were eaten at restaurants during the time period studied, down from 10% one year earlier. Eating at work and on-the-job decreased dramatically.

“The study found that Americans are more likely to be purchasing foods and beverages further away from consumption,” Procter said. “Stock-up trips (to grocery stores) are now more likely to contribute to everyday eating. But they found that young adults are the ones most likely to purchase foods for immediate consumption, often by delivery or carryout.”

Supporting research tells Procter that more eating at home probably translates to eating more healthfully. In fact, one of the report’s key takeaways is that instead of purchasing ready-to-eat foods, Americans are choosing to cook more often and try new recipes.

“We have more time to cook and there’s more interest in knowing the source of our foods, or preparing foods from scratch,” she said. “This survey reveals we are more interested in knowing how everything we bring into our lives affects our health.”

The Hartman Group surveyed 2,463 American adults aged 18 to 73 between April 9-30. Other key findings include:

Procter notes that time will tell if the healthy habits indicated by this year’s Eating Occasions Compass will stick around.

“When we are able to go back to our schedules and everyone no longer is encouraged to work at home, I suspect some of these new, healthier habits might slip; in some cases, quite a bit,” she said. “But I think we can be hopeful that some of those healthful habits will become a little more permanent, or show up more often. Hopefully those who have never cooked before and have now ventured there are going to continue to find the positives in that.”

Where we were eating during the pandemic changed quite a bit, but some of our eating habits stayed the same, according to a new report.

“We have more time to cook and there’s more interest in knowing the source of our foods, or preparing foods from scratch. This survey reveals we are more interested in knowing how everything we bring into our lives affects our health.”