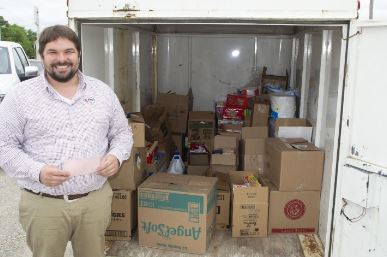 “Food fight!” Don’t worry, I’m not referring to a riot in the school cafeteria. This food fight is a friendly challenge to generate more food for local families who need a hand. This worthwhile competition went so well that it won recognition as an Ag Hero.

Matt Case is the manager of the Farmers Co-op in Columbus, Kansas. He grew up working on farms around Columbus and married his high school sweetheart. After being trained in precision machining, he worked in industry and then had the opportunity to come back and work for the Farmers Co-op in his hometown. In 2016, he became general manager.

The Farmers Co-op generates around $80 million in annual sales with seven locations in Cherokee County. It is also community spirited, hosting an annual food drive, for example.

One day in spring 2020, Matt got a call from Christina Holmes, the family and consumer sciences agent for K-State Research and Extension in Cherokee County. Christina explained that food pantries in the county were largely depleted due to the pandemic. A county-wide food drive was being planned to gather donated, non-perishable food items for the pantries. She asked if they could use the co-op’s truck scales to weigh the pounds of donated food. The more Matt learned about the project, the more he wanted to get involved.

“After she explained it, I said, ‘The only way you can use our truck scales is if I’m part of it,’” Matt said. He volunteered that the co-op would match up to the first 2,000 pounds.  “Oh, there’s no way we’ll get that much,” Christina said. Matt said to put them down to match 2,000 pounds anyway.

This first-time event was called the Cherokee County Food Fight. It was a challenge between the towns in the county. Each town had two weeks in which to collect and donate food. The one with the most donations would win the first-place trophy.

“It was an amazing opportunity,” Christina said.

Collection points were set up in each community. The project took off.

The towns in Cherokee County got into the competition. “People were posting pictures of piles of cans in their towns,” Christina said. “One organization was willing to go door-to-door to pick up donations.”

In the end, donations exceeded expectations by nearly five times. More than five tons, or 10,780 pounds, of foodstuffs were donated to food pantries in eight locations in Cherokee County. “When we pulled in with a trailer to deliver the donations, some of those ladies would just cry,” Christina said.

Columbus won the competition by donating 3,480 pounds. Baxter Springs was second with 2,760 pounds. On a per-capita basis, the smaller towns in the community did even better. The rural community of Weir donated 1,880 pounds. Weir has a population of 686 people. Now, that’s rural. This community was definitely punching above its weight class.

“Our local people and churches really respond where there’s a need,” Matt said. “The extension office came up with this idea and they knocked it out of the park.

“When the rules of the pandemic kept (extension staff) from getting out to do things in person, I could help. I credit Christina; she’s a rock star,” he said.

“The co-op was great, and everyone stepped up,” Christina said. “It wouldn’t have been possible without all the partners.”

The results were so remarkable that Matt Case of the Farmers Co-op was recognized by the Kansas Department of Agriculture as an Ag Hero during the 2020 Kansas Ag Summit. We’ll feature more of these Ag Heroes in coming weeks.

“Food fight!” No, it’s not a riot in the school cafeteria and you won’t have to duck a flying burrito. This friendly food fight generated literally tons of food for the county’s food pantries. We commend Matt Case, Christina Holmes, and all those who helped make a difference through this project. So, who won the food fight? Columbus got the trophy, but it was the residents of Cherokee County who were the winners.

When food pantries in Cherokee County were being depleted in spring 2020 due to the pandemic, K-State Research and Extension family and consumer sciences agent Christina Holmes planned a county-wide food drive competition. Matt Case, manager of the Farmers Co-op, got involved and helped lead the effort to collect nearly five times the expected amount of food donations for people who faced food insecurity.