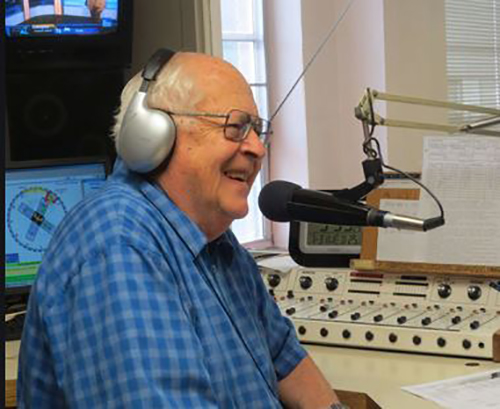 It’s time to change the channel. No, I’m not referring to the remote control for your television set, I’m talking about a remarkable broadcaster who found a new channel of communication through which to serve his community.

Tad Felts is a longtime, award-winning Kansas broadcaster who is now reaching his community through new channels of communication. Tad grew up in Garden City. While working on the high school newspaper, Tad would ask his classmates questions about various things such as school lunch or who they thought would win the football game. He published the informal results in a newspaper column which he creatively named The Tadpoll. That name would become his trademark through the decades.

As a kid, Tad swept floors and played records at the local radio station and launched a career in radio. He went to college at Fort Hays State and worked at stations in Hays, Goodland, Phillipsburg, and then in Idaho.

In 1972, Tad and his wife were back in Phillipsburg visiting friends at Christmastime. He ran into the manager of the local radio station who convinced him to come back to Phillipsburg and take an announcing job. Tad has been at Phillipsburg ever since.

Tad served as news and sports director. Throughout his radio career, Tad also utilized the name The Tadpoll for his interactive radio programs. He would go on the air and ask his audience for opinions. Eventually that format became a series of interviews with various guests.

Through the years, Tad covered countless city council and school board meetings plus all kinds of sporting events. He also volunteered to accompany the local high school seniors on their annual school trip to New York City and Washington, D.C.

The Kansas Association of Broadcasters annually awards the Hod Humiston Award for Sports Broadcasting and the Sonny Slater Award for Service to Station and Community, in addition to inducting members into the KAB Hall of Fame. Tad is the only Kansas broadcaster to have received all three honors. He was even inducted into the Kansas State High School Activities Association Hall of Fame.

For decades, his distinctive voice has resounded across northwest Kansas. One time he was in the New York subway system and a young woman, originally from Smith Center, called him by name because she recognized his voice.

Tad is now an amazing 87 years old. His wife passed away a few years ago, and he retired from the radio station. After being honored at a chamber of commerce dinner a few years ago, he was approached by some local people who had founded a Facebook page called My Phillips County Online. They asked if he would want to do The Tadpoll and other programs online.

Tad agreed to do it. In 2017, he began doing the Tadpoll, sports, and other programs on the My Phillips County Online Facebook page. He was doing both audio and video until the pandemic hit. Now he does strictly audio over the telephone.

The pandemic has caused his reports to be extremely valuable, especially after a serious COVID-19 outbreak occurred in the nursing home in the nearby Phillips County town of Logan. Tad kept citizens updated with his special reports on the status of the disease. Logan is a rural community of 589 people. Now, that’s rural.

On the Tadpoll, Tad continues to interview people such as the county health officer, hospital administrators, and other community leaders. “I’m not getting paid, I’m doing this just for fun,” Tad said. “This is my home. I’m doing it to help the community.”

It’s time to change the channel – not on the TV set, but the channel of communication through which Tad Felts is reaching the community. Although the channel may have changed, Tad Felts is still making a difference by serving his community in this innovative way. You might say he is channeling important news.

Longtime, award-winning radio broadcaster Tad Felts retired from the radio station in Phillipsburg. At age 87, he has now found a new way to continue broadcasting online through the My Phillips County Online Facebook page.