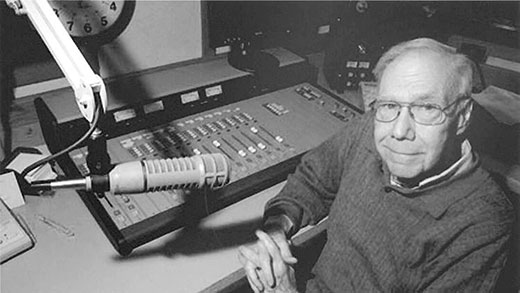 Ralph Titus, former station manager of KSAC and KKSU, has been named to the 2020 class of the Kansas Association of Broadcasters Hall of Fame. | Download this photo.

Titus, who passed away in 2018, is being inducted posthumously in this year’s class, though the honorees will not be officially honored until the 2021 ceremony due to the COVID-19 pandemic.

For most of his professional career, Titus was the program director or station manager of KSAC and KKSU, lifting the station to distinction as one of the premier university-owned radio stations in the United States.

“Ralph was a broadcaster’s broadcaster; he produced more award-winning programs and features than you can count,” said Eric Atkinson, host of the weekday Agriculture Today program whose own career at KKSU dates to 1983. “His ability to weave together a report or story that was both entertaining and informative was unmatched.”

Titus graduated from K-State in 1955, spent two years in the Air Force, then worked as the assistant news director for WIBW-TV in Topeka, and as television news anchor for KWTV in Oklahoma City. He returned to K-State in 1962 as assistant manager and program director for KSAC (later known as KKSU).

In 1988, Titus was named operations manager and general manager of radio, television, video and film services for K-State Research and Extension’s communications unit.

He was widely known as ‘The Voice of Kansas State University,’ and earned acclaim for interviews with three U.S. presidents, numerous heads of state and countless politicians and military leaders. However, he often said his interviews with less-famous people were more interesting.

In 1967, President Lyndon B. Johnson signed the Corporation for Public Broadcasting Act and Titus – with four others – developed the format for National Public Radio, including news and information coverage known as All Things Considered. Titus contributed more reports to All Things Considered during its first decade than any other broadcaster.

One of the projects Titus received acclaim for was a 13-week series on President Dwight D. Eisenhower, a native of Abilene, Kansas. The extensive audio biography was broadcast on NPR, the British Broadcasting Corporation, and the Voice of America.

“For all of his credits and accomplishments, Ralph was always a down-to-earth guy with a tremendous sense of humor,” Atkinson said. “You could converse with him about anything, and it was always a good conversation. He was just one of those people you always enjoyed being around.”

Titus is joined in KAB’s 2020 Hall of Fame class by another noted Kansas radio personality and Wichita State University public address announcer Don Hall, who died earlier this year. A listing of all honorees with short biographies is available online.

Ralph Titus, the former program director and station manager for K-State's KKSU radio station, has been named to the 2020 class of the Kansas Association of Broadcasters Hall of Fame.

Kansas Association of Broadcasters Hall of Fame Class of 2020

“For all of his credits and accomplishments, Ralph was always a down-to-earth guy with a tremendous sense of humor. You could converse with him about anything, and it was always a good conversation. He was just one of those people you always enjoyed being around.”