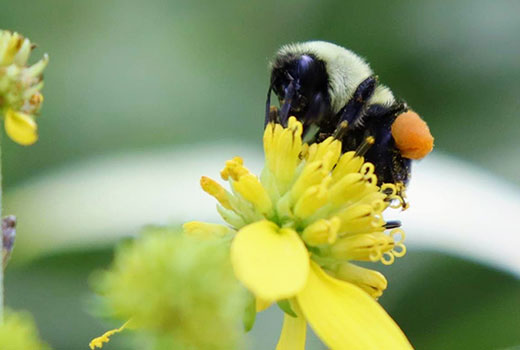 MANHATTAN, Kan. – A Kansas State University researcher’s effort to develop an artificial intelligence tool for identifying bees has created quite a buzz already.

Brian Spiesman, an assistant professor in K-State’s Department of Entomology, launched the website, BeeMachine.ai, earlier this year to relieve a backlog of information needed to help track trends in bee populations across the world.

“Bees can be very difficult to identify without specialized training,” Spiesman said. “Even the experts have trouble with some bee groups. For bee research, the identification is, thus, costly and very time consuming, which creates a huge bottleneck that slows the pace of research.”

Spiesman’s site uses computer vision, a form of artificial intelligence, to identify bee species in images. So far, he has collected more than 90,000 images, many from existing science databases and some from people who have submitted to the online library.

“The artificial intelligence models are ‘data hungry,’” Spiesman said, “which means they require a lot of training images to learn the best set of features used to make the identification. The bees in the images are photographed at all angles, different body positions, lighting, background context and more. So the set of images has to account for a good part of variation to be able to make accurate predictions.”

Spiesman’s work so far has focused on bumblebees, of which there are 45 species in North America and nine or more that are rare or “not represented by enough images to include in the AI models,” he said. There are 250 bumblebee species in the world.

“Bees, including bumblebees are typically not aggressive unless they are harassed,” Spiesman said. “Wild bees are very important for pollinating crops and plants in natural ecosystems. In fact, wild bees can be more effective pollinators than non-native honey bees. Bumblebees are particularly good pollinators of crops like blueberries and tomatoes that require buzz pollination.”

“Native bees are critical to our natural environment and much of the food we eat,” Spiesman said. “We know relatively little about population trends in most of the 20,000 bee species in the world, but evidence suggests that many species are in decline.”

He said bees are subject to de-population due to loss of habitat, pesticides and pathogens.

“Given the large number of species and the wide areas over which they forage, we need new technology – such as artificial intelligence – to automate the process of identifying and tracking at-risk populations, determine the cause for declines and provide science-based conservation measures.”

“Over the longer term,” he said, “my team will be working on greatly expanding the number of bee species that the model can identify, and placing the model with cameras that can be deployed in a field to automate data collection of large spatial and temporal scales.

“This will allow us to monitor bee populations on large scales so that we can track population trends, study plant-pollinator interactions, and gain a better understanding of pollinator ecology and response to such things as habitat loss and climate change.”

BeeMachine.ai currently offers a web app that can be accessed from any home computer, but Spiesman said a mobile app will be available soon. Then, he notes, he encourages people to get out and look for bees in their yard or anywhere they go.

“People will not need to know much about bees to use the app,” Spiesman said. “The app will provide information about the species and let users know if what they are observing is really a bee or one of the many convincing mimics like a hover fly. Further, users will know that their observations are contributing important data to the science and conservation of these important organisms.”

The recently launched website, BeeMachine.AI, will help to relieve a backlog of information needed to help track trends in bee populations across the world.

“Given the large number of species and the wide areas over which they forage, we need new technology – such as artificial intelligence – to automate the process of identifying and tracking at-risk populations, determine the cause for declines and provide science-based conservation measures.”