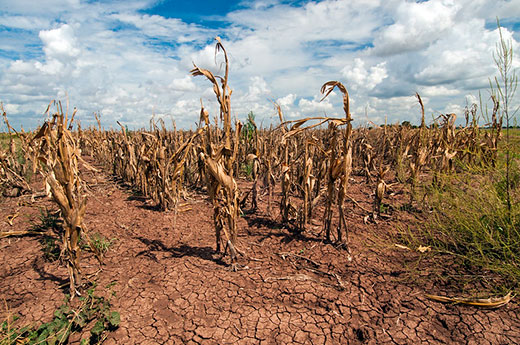 Hot, dry, windy conditions are happening with more frequency in western Kansas south to west Texas, according to a new study by Kansas State University researchers. The result can include loss of crop yields. (Photo courtesy of Bob Nichols, U.S. Department of Agriculture) | Download this photo.

MANHATTAN, Kan. – You don’t need to tell folks in western Kansas that it can get hot there. And sometimes windy. And sometimes really dry. But when all three conditions happen at the same time – and especially for a long period of time – droughts develop, crops produce less grain, and wildfires are sparked more easily.

And according to a new Kansas State University study, the conditions are happening more frequently than they used to in western Kansas, and south into west Texas.

“We found increases in the frequency of hot, dry, windy events over time that indicate new and different patterns in the Great Plains,” said Vahid Rahmani, an assistant professor of biological and agricultural engineering at K-State. “This research showed the highest frequency of hot, dry, windy events occurred in western Kansas southward into Texas for the period 1949 to 2018.”

Rahmani teamed with then-K-State doctoral student Ameneh Tavakol and professor John Harrington in K-State’s Department of Geography and Geospatial Sciences on the study. Tavakol is now an environmental scientist in California.

The study, partially funded by the U.S. Department of Agriculture Ogallala Aquifer Program, was published in the Sept. 24, 2020 edition of Nature Research Scientific Reports.

“Farmers depend on favorable weather conditions for their livelihoods,” Rahmani said. “Devastating crop damage can be caused by events where low humidity, high temperature, and high wind speeds combine to disturb the water balance in plants and intensify evapotranspiration.”

He cited a period in 1888 when a severe stretch of hot, dry and windy days desiccated corn acreage in southern Kansas. Another time, in 1931 and following a month without rain, seven consecutive days of hot winds were reported at Ashland, Kansas, including a report of 120 degrees F on Sept. 5.

Rahmani said this type of research deepens understanding about events such as this year’s derecho, the destructive storm that raced across the U.S. Midwest and caused an estimated $7.5 billion in agricultural losses alone. The August 10 storm swept across several states, flattening crops and damaging homes, businesses and other structures with winds up to 140 miles per hour.

Crop damage can occur from just a few hours of hot, dry, windy events, he said.

Those events, also called “furnace winds,” are when the temperature is higher than 35 degrees C or 95 F (a threshold considered critical for crop development), the relative humidity is below 30%, and the wind speed is equal to or greater than 7 meters per second, he added.

Rahmani, who leads K-State’s Climatic and Hydrologic Extremes Laboratory, said even as a child, he was interested in water and its availability and use in rural areas and cities. That and a desire to teach at the university level made his career path obvious. Now, his research focuses on how resilient our infrastructures are to climate extremes of droughts and floods and how decision makers can best adapt to those extremes. The goal, he added, is to understand the impacts of climate change on water and food security.

This latest research means at field scale, farmers can use the findings to make better decisions about their irrigation and crop practices. At the regional and national scale, the information can help farmers and planners improve their water management and planting strategies.

“The higher temperatures associated with climate change may increase the frequency of extreme hot, dry, windy events,” he said. “Hot, dry, windy events have implications beyond crop production. Wind-driven wildfires can occur in areas that never experienced them before. Increased evapotranspiration is expected where and when these compound extreme meteorological events were most observed. Adaptation and mitigation strategies may need to be adjusted to effectively cope with the negative impacts of these events.”

Getting into the details

The trends were not the same across the whole region, however. The research revealed that unlike the upward trend in Texas and the western Great Plains, there has been an overall decrease in these events in the eastern regions of North Dakota and South Dakota.

“Our current effort examines how different climate indices can be improved and used to enhance crop yield and water management particularly during extreme climate and hydrologic conditions of drought and flood,” Rahmani said. “We hope that our research helps farmers and others plan to increase their resilience in coming years and decades and at the same time reduce their vulnerabilities in the new conditions.”

“We found increases in the frequency of hot, dry, windy events over time that indicate new and different patterns in the Great Plains.”