Bailey is lauded for displaying traits that symbolized the famed educator, humanitarian

MANHATTAN, Kan. – A Kansas State University senior who has helped to lead campus efforts on diversity and campus ministry has been named the recipient of the 2020 George Washington Carver Spirit of Innovation and Service Award.

Jordan Bailey received the award Oct. 30 during the annual George Washington Carver Symposium and Awards program, which was held online and hosted by Simpson College of Indianola, Iowa.

Seminar host Walter Lain, the assistant dean of multicultural and international affairs at Simpson College, wrote that Bailey was honored because he “demonstrated the traits and characteristics of Dr. George Washington Carver that made him a successful educator, scientist, leader and humanitarian.”

Bailey is majoring in animal sciences and industry, with a minor in business. During his time at K-State, he has served in leadership roles for the College of Agriculture’s Minorities in Agriculture, Natural Resources and Related Sciences (MANRRS). During his time as president, membership in that organization doubled.

He is also active in the campus ministry program, Student Mobilization, the American Red Cross and The Kaleo Project, a Christian-based organization focused on bringing more faith and love to urban communities.

He is the son of Darrel and Brenda Bailey of Junction City, Kan.

“In this year when the principles of equality and justice in our nation are challenged in very visible ways, selecting a deserving student for this award is particularly meaningful,” said Ernie Minton, dean of the K-State College of Agriculture. “Jordan has not only demonstrated excellence in the enhancement of diversity in our K-State community, he holds the possibility of creating positive change for our future.”

The annual awards program and symposium is a collaborative effort of the George Washington Carver Birthplace Association and its legacy institutions, which include K-State, Iowa State, Lincoln University, Simpson College and Tuskegee University. 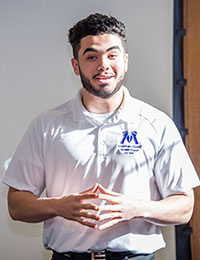 A K-State senior and former president of Minorities in Agriculture, Natural Resources and Related Sciences has received the George Washington Carver Spirit of Innovation and Service Award.

“Jordan has not only demonstrated excellence in the enhancement of diversity in our K-State community, he holds the possibility of creating positive change for our future.”