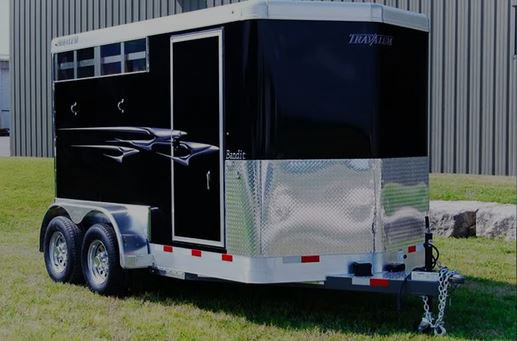 Some days I feel pulled in different directions. Probably lots of people feel that way these days. Today we’ll meet a company that finds its products are definitely being pulled in lots of different directions – but that’s a good thing. That’s because this company makes livestock trailers that are pulled by trucks from Kansas to locations all across the continent.

Jeff Grieshaber is co-owner and manager of TravAlum Trailers, produced by Liberty Inc. in Manhattan. From its home base in Kansas, this company’s trailers are being pulled in lots of different directions.

TravAlum Trailers has its roots in the Travalong trailer company which was based in Waterville. In 1991, Jeff’s father Tom and two other gentlemen bought the Travalong company. Jeff came on board in 1992.

Travalong Trailers were built from steel. In 1995, this group also bought an aluminum stock-trailer business in southwest Missouri. After operating two facilities for a number of years, they brought that business to Kansas. In 2014, they sold the steel factory at Waterville along with the Travalong brand name, in order to concentrate on the aluminum trailer business. Because of the historical connection with Travalong and because these trailers are made of industrial strength aluminum, these trailers are called TravAlum.

“Our aluminum trailers stand up a lot better than the old steel trailers,” Jeff said. “With all the chemicals used to treat roads these days, the steel tends to rust.” After hauling a load, the aluminum trailers can be washed out with water without worrying about rust.

“Our aluminum trailers have nicer appearance and finish, and they’re a lot more durable,” Jeff said. He pointed out that aluminum trailers are 30% lighter than steel trailers. “They’ve come a long way,” Jeff said. In addition to other improvements, the trailer nose has been reshaped to make it more aerodynamic.

The company emphasizes quality with the theme of “American made, American strong.”  “We weld our trailers rather than using rivets,” Jeff said.

TravAlum primarily manufactures livestock trailers, horse trailers and utility trailers. Most models can be custom made to the customer’s specifications. They may be gooseneck models or bumper pull and in larger or smaller sizes. They even have a smaller version that can fit inside the bed of a pickup truck. That is especially handy for hauling smaller livestock and it doesn’t require hitching up to a large trailer.

The company’s website includes a gallery of photos showing 166 different options for various configurations of gates, flooring, and design. One of the choices for flooring, for example, is a Polylast floor that provides safe, durable footing for horses.

Another of the company’s innovations is a movable internal gate that can be set to various positions inside the trailer. The company also offers a combo trailer that includes a space for cattle plus a section tailored to carry horses. The horse trailer selection can include space for tack, saddle racks and more.

Location and convenience make a difference for the company’s headquarters as well.

“We are centrally located in the middle of the country, which is definitely a plus,” Jeff said. TravAlum has an extensive network of dealers from Ohio to Oregon and from Texas to Sasketchewan, including 10 locations in Canada. Most of the company’s sales are west of the Mississippi.

On two occasions, TravAlum sold trailers that were significantly west of the Mississippi. How far west? Would you believe Hawaii? Yes, the Parker Ranch on the big island of Hawaii has been a repeat customer for TravAlum Trailers.

Those deliveries crossed an awful lot of water. Perhaps it’s fitting that this company had its roots in the rural community of Waterville, population 680 people. Now, that’s rural. For more information, go to www.travalum.com.

Some days I feel pulled in different directions. That can be stressful, but today we’ve learned about a company that has found success in having its products pulled in many different directions. We commend Jeff Grieshaber and all those involved with TravAlum Trailers and Liberty Inc. for making a difference with entrepreneurship in the aluminum trailer industry. When it comes to success, this business can pull it off.

Jeff Grieshaber joined the stock trailer manufacturing business owned by his father and others. They now concentrate on building aluminum stock trailers which have gone across the nation and as far away as Hawaii.