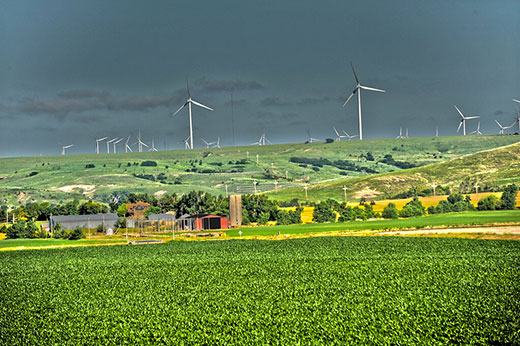 Researchers are studying ways to capitalize on wind energy and tie together crop production, energy production and water use in rural communities. | Download this photo.

Five year study is funded by the National Science Foundation

MANHATTAN, Kan. – Researchers at four U.S. universities have embarked on a five-year study that capitalizes on one of the Central Plains’ most abundant natural resources – wind – to store energy in ammonia.

They say their work – which is funded by the National Science Foundation – could help stunt the population drain that is common in many rural communities by tying together crop production, energy production and water use.

Together, they form a project known as FEWtures, focusing on food, energy and water needs for rural communities. The group includes experts in engineering, hydrology, agricultural economics, business, political science, sociology and education.

“It is a multi-disciplinary study,” Amanor-Boadu said. “That was intentionally done because of the complexity of bringing the implications of food production, rural communities, water needs and energy requirements together.”

Listen to an interview by Eric Atkinson with Vincent Amanor-Boadu on the weekday radio program, Agriculture Today

Many parts of Kansas and surrounding states have benefitted from wind energy to power their communities. “The problem with wind is that you can generate electricity, but if you don’t use that electricity right away, you lose it,” Amanor-Boadu said.

Amanor-Boadu said the FEWtures project will capitalize on nitrogen taken from the air; use the energy from wind; combine it with hydrogen from water; and use all that to make ammonia, a compound made of nitrogen and hydrogen.

“When you do that, you are actually putting energy into the bonds between the nitrogen and hydrogen,” Amanor-Boadu said. “Then, when you want that energy back, you just split the nitrogen from the hydrogen. So, basically, you can think of ammonia as batteries.”

Peter Pfromm, a chemical engineer formerly at K-State but now working at Washington State University, is leading the ammonia-as-battery initiative of the FEWtures project. Amanor-Boadu said the ammonia produced through this process is more environmentally friendly than that produced using the industry standard Haber-Bosch process.

“When the energy stored in the ammonia is not needed, it will become available as fertilizer in food production,” he said. “Farmers could pay less for ammonia produced this way.”

Amanor-Boadu said K-State electrical engineers, led by Hongyu Hu, are working on methods to optimize production of wind captured at the local level.

“Extra energy left from the production of electricity could be used to treat wastewater that is generated in the community,” Amanor-Boadu said. “Depending on how clean you want the wastewater to be, the more energy you will need. If you treat water to the point of being able to use it for irrigation, then you are also reducing the draw of water from the aquifer.”

Amanor-Boadu and his colleagues in agricultural economics and the College of Business will be working on a decision support system to help local officials determine what is the most economical use of ammonia for their community. A livestock community may direct more of the resource toward treating water for cattle, while a crop community may choose to treat more wastewater to increase the amount of water available for agriculture.

The project is one year old, with four more to come.

“A lot of the science is already complete,” Amanor-Boadu said. “The rest of our work is calibrating these ideas to fit certain regions. The ball is in our court to build a decision support system in a way that it doesn’t have to be customized in every community, but rather you … get people’s specific realities into the model for them to make their own decisions.”

Research is currently being conducted in Kansas, Colorado, Oklahoma, Texas and New Mexico, involving 75 counties. Amanor-Boadu said the research team is seeking farmers and ranchers living in the region to participate in a short survey that is available online.

The National Science Foundation is funding a five-year study covering five states and 75 counties in the Central Plains that aims to find solutions to the population drain in many rural communities by tying together crop production, energy production and water use.

“A lot of the science is already complete … The ball is in our court to build a decision support system in a way that it doesn’t have to be customized in every community, but rather you … get people’s specific realities into the model for them to make their own decisions.”